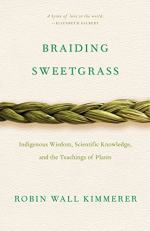 Robin Wall Kimmerer
This Study Guide consists of approximately 46 pages of chapter summaries, quotes, character analysis, themes, and more - everything you need to sharpen your knowledge of Braiding Sweetgrass.

The following version of this book was used to create the guide: Kimmerer, Robin Wall. Braiding Sweetgrass. Milkweed Editions, 2013.

“Planting Sweetgrass” includes the chapters “Skywoman Falling,” “The Council of Pecans,” “The Gift of Strawberries,” “An Offering,” “Asters and Goldenrod,” and “Learning the Grammar of Animacy.” Kimmerer introduces the concepts of reciprocity, gratitude, and gift-giving as elements of a healthy relationship with one’s environment which she witnessed from her indigenous family and culture growing up. She compares this healthy relationship to the scientific relationship she experienced as a young scholar, wherein she struggled to reconcile spirituality, biology, and aesthetics into one coherent way of thinking.

“Tending Sweetgrass” includes the chapters “Maple Sugar Moon,” “Witch Hazel,” “A Mother’s Work,” “The Consolation of Water Lilies,” and “Allegiance to Gratitude.” This section more closely explores the bounty of the earth and what it gives to human beings. It establishes the fact that humans take much from the earth, which gives in a way similar to that of a mother: unconditionally, nearly endlessly. It asks whether human beings are capable of being ‘mothers’ too, and whether this feminine generosity can be reciprocated in a way which is meaningful to the planet.

“Picking Sweetgrass” includes the chapters “Epiphany in the Beans,” “The Three Sisters,” “Wisgaak Gokpenagen: A Black Ash Basket,” “Mishkos Kenomagwen: The Teachings of Grass,” “Maple Nation: A Citizenship Guide,” and “The Honorable Harvest.” This section dwells on the responsibilities attendant on human beings in relation to the earth, after Kimmerer already establishes that the earth does give gifts to humanity and that gifts are deserving of reciprocal giving. She sees these responsibilities as extending past the saying of thanks for the earth’s bounty and into conservation efforts to preserve that which humanity values.

“Braiding Sweetgrass” consists of the chapters “In the Footsteps of Nanabozho: Becoming Indigenous to Place,” “The Sound of Silverbells,” “Sitting in a Circle,” “Burning Cascade Head,” “Putting Down Roots,” “Umbilicaria: The Belly Button of the World,” “Old-Growth Children,” and “Witness to the Rain.” Here, Kimmerer delves into reconciling humanity with the environment, dwelling in particular upon the changes wrought between generations upon the way in which one considers the land one lives on.

“Burning Sweetgrass” is the final section of this book. The chapters therein are “Windigo Footprints,” “The Sacred and the Superfund,” “People of Corn, People of Light,” “Collateral Damage,” “Shkitagen: People of the Seventh Fire,” “Defeating Windigo,” and “Epilogue.” These chapters paint an apocalyptic picture of the environmental destruction occurring around the world today and urge the reader to consider ways in which this damage can be stemmed. The chapters reinforce the importance of reciprocity and gratitude in defeating the greed that drives human expansion at the expense of the earth’s health and plenitude.

More summaries and resources for teaching or studying Braiding Sweetgrass.