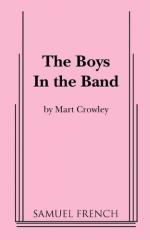 The Boys in the Band Characters

Mart Crowley
This Study Guide consists of approximately 65 pages of chapter summaries, quotes, character analysis, themes, and more - everything you need to sharpen your knowledge of The Boys in the Band.

Bernard is the one African American in the group. He has a small part in the play until the end when Michael initiates the Affairs of the Heart game. Encouraged to phone someone he loves and tell him that he loves him, Bernard chooses to phone Peter Dahlbeck, the son in the household where his mother worked as a domestic. Once, when they were drunk, Peter and Bernard were intimate with each other in the pool house, but they never spoke of it again. When Peter's mother answers and says that he is off on a date, Bernard spends the rest of the play angry at himself for having been so stupid as to have phoned.

The Cowboy is a handsome young man dressed in a cowboy outfit, hired for twenty dollars to sing "Happy Birthday" to Harold and spend the night with him. Unfortunately, he shows...

More summaries and resources for teaching or studying The Boys in the Band.

The Boys in the Band from Gale. ©2005-2006 Thomson Gale, a part of the Thomson Corporation. All rights reserved.