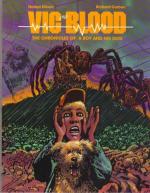 Ellison's 1993 Mefisto in Onyx is a novel combining crime novel characters with supernatural elements. When a district attorney suspects that a convicted man is innocent, she persuades a man who can read minds to uncover the truth. Critics praise the book for its pace, originality, and characterization.

Robert A. Heinlein's classic science fiction novel, Stranger in a Strange Land (1961), is the story of Valentine Michael Smith, a man brought up by Martians who arrives on earth as a foreigner. This Hugo Award-winning novel continues to intrigue readers with its plot, characters, and controversial topics.

George Orwell's 1984 (1949) is a classic novel describing a dystopic future in a new region called Oceania. The main character, Winston, is in danger because he questions the all-powerful, all-seeing Big Brother.