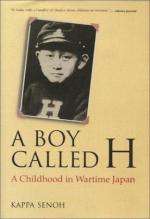 Based on your reading of the novel, why were so many ordinary Japanese people caught up in militarism and war fever during the 1930s and 1940s?

Is there ever a justification for press censorship during times of war, or should the press always be free?

Research the U.S. dropping of the first atomic bomb on Hiroshima in 1945. Why did the United States drop the bomb? Was the decision to use the bomb justified?

Research the American Occupation of Japan after World War II. How did the American authorities go about eradicating militarism and instilling a democratic spirit?

In what ways has the novel given you a better understanding of World War II?

By the end of the novel, does H still seem like a boy from a foreign culture, or does he seem more like teenagers in other places? Is he...