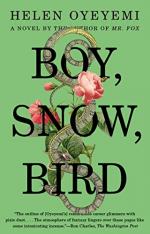 The action of “Boy, Snow, Bird” begins in New York City in the mid-1950’s. Narrator Boy Novak describes both the desperation-triggering circumstances in which she’s raised at the hands of a violently abusive father, and her flight from both the city and her family of origin to Flax Hill, a small conservative town removed from her other life by several miles, several states, and several different moral values and choices.

As she struggles to find and keep a job, the blond and beautiful Boy makes friends (including investigative journalist Mia) and finds a boyfriend – the insistent Arturo Whitman, who eventually convinces Boy to marry him, in spite of the apparent ill-wishes of his mother, Olivia, and the complications of his beautiful, spoiled daughter, Snow.

Shortly after the wedding, Boy gives birth to a baby whom she names Bird, a girl who, as it turns out, has “colored” features and pigmentation (the word "colored" is used throughout the narrative to define those who would, in more contemporary language, be described as African-American, or of African-American heritage). As the result of Bird’s birth, Boy learns that her husband and his family (including his first wife, Snow’s mother) are pale-skinned “colored” people descended from slaves who, way back in the family tree, made marriage choices and child-bearing choices that enabled them to preserve, and even deepen, their history of being able to pass as white and thereby avoid the systemic, cultural racism of mid-20th Century America. Eventually, after she learns more about the Whitman family and why its members are simultaneously rejecting of the dark-skinned Bird and adoring of the pale-skinned Snow, Boy decides to send Snow to live with a dark-skinned aunt and keep Bird with her at home.

In the novel’s second part, the narrative focus and voice shift to Bird, thirteen years old and fully aware that much of her family (including the particularly strict Olivia) barely tolerates her. Boy, however, is forcefully yet somehow distantly protective of her, insisting as much as she can that Bird be treated if not as well as Snow, at least humanely. Bird, meanwhile, discovers that Snow has been writing letters to Boy and to her, letters which Bird had no idea even existed. Bird steals the letters, reads, them, and eventually writes back. A correspondence springs up between Bird and Snow in which they discuss their respective situations, tell each other fairy tales, and make plans to become friends. Part 2 ends with the announcement of the likelihood that Snow will be visiting the rest of her family for Thanksgiving.

In Part Three, the narrative’s perspective shifts back to Boy, who describes the tension-filled atmosphere at Thanksgiving dinner, and how afterwards, her friend Mia revealed a secret she’s been keeping about Boy for some time. That secret involves Boy’s father who, Mia’s investigations have revealed, is in fact a woman – an intellectual lesbian who conceived Boy after being raped, and who soon realized that the only way to have the kind of life she wanted and to keep her daughter was to pose as a man. At first, this news makes Boy upset, but she soon decides that her father/mother needs her help, rounds up Bird and Snow, and leaves with them for New York City, where she hopes that all three of them will be able to bring some apparently much needed happiness into the man/woman’s life.