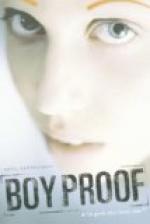 Cecil Castellucci
This Study Guide consists of approximately 31 pages of chapter summaries, quotes, character analysis, themes, and more - everything you need to sharpen your knowledge of Boy Proof.

"Boy Proof," written by author, Cecil Castellucci, is a novel that tells the story of Victoria "Egg" Jurgen and her journey of self-discovery and acceptance.

In the first four chapters, the reader is introduced to the main character, Victoria Jurgen, who prefers to be called "Egg," as she has modeled her physical appearance and clothes after her favorite Sci-Fi character. She informs the reader that she has made herself intentionally boy proof because she enjoys her life the way it is. In these chapters, the reader also meets Victoria's mom, a currently out-of-work actress, Max Carter, an equally smart, unique and talented boy who is new to Victoria's school, her friends, Martin and Rue, who are dating, and Hasan, her classmate, Nelly Melendez and Victoria's dad, Sam Jurgen, a Hollywood "creature maker." Also in these chapters, the reader learns that Victoria seems threatened by Max's intelligence, that she argues frequently with her mom and that although she presents with a tough and confident exterior, Victoria seems to use this exterior to protect herself from feeling hurt that others do not understand or accept her.

Throughout chapters 5-14, Victoria and Max continue to build a connection based on their shared interests, although Victoria appears to be fighting hard against developing the friendship. The text suggests that, although she is resistant to his friendship, Victoria finds Max somewhat attractive. In chapters 8-10, Victoria's relationship with her mother is developed further, as is her continued struggle in math. Chapter 8 reveals that Victoria has a general "burning black feeling" inside, a force that appears to shape how she thinks about herself and interacts with others. Developing throughout these chapters as well is the relationship between Max and Nelly. Victoria finds herself being jealous of their relationship and she begins to rethink whether telling Max to leave her alone was a good idea or not.

In chapters 15-18, things begin to go downhill for Victoria. Max, who she though was her friend, stole the idea from her photograph and turned it into an editorial cartoon without giving her credit, she finds out that her idol, Saba Greer, the actress that plays "Egg," is mean-spirited and nothing like her character and she finds out that, because her math grade continues to decline, she may not be valedictorian, an honor she's been working hard to achieve.

Chapters 19-24 develop the plot further in several different ways. Victoria discovers how much she enjoys making creatures and she decides to ask her friend, Rue, to be her math tutor. Although she continues to grow jealous of Nelly and Max's relationship, feeling that she is invisible, Victoria and Max spend time together and realize how much they have in common. He appears to see her for who she really is and he encourages her to transfer her passion for a movie to real life.

Chapters 25-28 provide a climax to the story when Victoria's relationships with others. Feeling led on by Max, Victoria shares her anger with him and, after he makes comments about Victoria's personality that are too close for comfort, they stop talking to one another. Victoria also loses her friendship with Rue when she doesn't show up for tutoring and makes insensitive comments to Rue. Victoria is also suspended from the Science Fiction and Fantasy Club, losing access to the one place where she had friends with common interests. Feeling the pain of true loneliness and realizing that what everyone said about her was right, Victoria decides to rethink her actions and perspective on life at the end of chapter 28.

Chapters 29-42 provide an ending to Victoria's story. Again consisting of several short chapters, Victoria finds that her friendlier, more positive approach to life is paying off. She is able to mend her relationship with Max, get back into the Science Fiction and Fantasy club, repair her relationships with Rue and her other friends, get involved in "real world" issues, accept and appreciate her mother for who she is; accept and appreciate who she truly is; including not using the name "Egg" anymore; realize her true love for making creatures; and make plans to pursue her passion after graduation and turn her friendship into a romantic relationship with Max. The story ends with Victoria focused on her present and looking forward to a bright future.

More summaries and resources for teaching or studying Boy Proof.

Boy Proof from Gale. ©2005-2006 Thomson Gale, a part of the Thomson Corporation. All rights reserved.