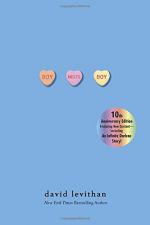 David Levithan
This Study Guide consists of approximately 37 pages of chapter summaries, quotes, character analysis, themes, and more - everything you need to sharpen your knowledge of Boy Meets Boy.

Paul is an openly gay high school sophomore whose best friends are Joni and Tony, another openly gay boy from the next town over, whose parents reject his sexuality. The trio of friends goes to see a musician perform at the local bookstore, where Paul sees Noah for the first time. Paul stammers as he goes and talks to Noah, whose family has just moved to town, and Paul walks away desperately wanting to be his boyfriend.

The next week at school, Paul runs into Infinite Darlene, a drag queen who is a popular figure around the school, who is both homecoming queen and starting quarterback on the football team. Much later, at the school’s homecoming rally, Paul spies Noah from across the way, and goes over and begins to flirt with him. When Paul attempts to meet up with Noah after school, he is sidetracked by other students, and Paul is roped into planning the school’s upcoming dance. The next day, Noah invites Paul over to his house, and they happily paint together in Noah’s attic, which he has converted into a studio.

Joni has begun to date Chuck, a member of the football team, and not her regular on-again, off-again boyfriend, Chuck. Infinite Darlene does not approve of the arrangement, because she used to date Chuck. Paul accompanies Joni and Chuck to lunch, and privately keeps score of what he sees as Chuck’s positive and negative comments. That weekend, Noah and Paul have an extended date around the town. When Paul goes to rent a movie for them, he runs into his own ex-boyfriend, Kyle Kimball, who suddenly apologizes for the way their relationship had ended. At school the next week, tensions begin to grow between Paul, Joni, Chuck, and Ted. When they all happen to go to the same diner after school, Chuck and Ted battle to get the highest score in pinball.

That weekend, Paul and Tony go on a hike together. At the end, Paul gives Tony a hug of support. But, one of Tony’s parents’ religious friends sees them, and believes they are in a romantic relationship. When Paul returns to school, Kyle is distraught by the death of his aunt. They go into a closet to have a private conversation, where Paul kisses Kyle. Later, when Paul sees Noah, Noah wants to slow down their relationship. That night, Paul goes over to Noah’s house to see if they can begin dating again. Noah says he is distraught that Paul kissed Tony, to which Paul responds that Noah was misinformed, and he had actually kissed Kyle. This affirmatively causes a break in Noah and Paul’s relationship.

At school, Paul runs the first meeting about the upcoming dance, a committee that includes Kyle. It is decided that it will be death-themed, since the dance is already known as the Dowager Dance, due to the school’s wealthy benefactor. Paul attempts to mend his relationship with Joni by striding into the girls’ locker room to talk with her, but they reach an impasse. A few days later, Paul and the dance-planning committee go to the local graveyard, to conduct “research” for the dance. Kyle and Paul go into the dowager’s crypt, where Kyle now begins to kiss Paul. Paul refuses, and Kyle leaves sadly. Later, Paul goes to Tony’s house, where Tony commiserates on the differences between their neighboring towns. When Tony’s parents arrive back home, Tony boldly asks them if Paul can stay in the common areas of their house, an arrangement they agree to.

Paul decides to win back by launching an elaborate gift-giving spree to Noah, making him an elaborate origami set-up, and also gifting him several rolls of film. At the end of a day of school, they meet on the school steps and kiss again, restoring their relationship. Later, they go to Tony’s house, and discuss how to get him to the school dance, which Tony believes will require many people helping to pick him up. Paul goes to Joni’s house to attempt to make amends with her and, despite assistance from Joni’s mom, they still end at an impasse. The next day, as Paul and the committee set up the dance, Paul makes out with Noah under the bleachers. On the day of the dance, the entire planning committee and other friends come to pick up Tony, including, at the last minute, Joni and Chuck. Tony proposes that they go dance in a field to a radio before going to the actual dance, which the group does.