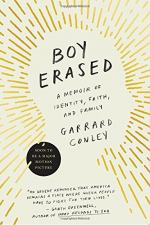 The book opens in June of 2004. Garrard Conley was 19 years old, homosexual, and living in the American South. His parent assigned him up for a sexual reorientation program at a fundamentalist Christian institution called Love in Action (LIA). The director of LIA, John Smid, preached the rejection of all secular pleasures in favor of religious devotion. Thus, when Conley arrived at LIA, the staff confiscated all of Conley’s belongings. Just like in the community of Conley’s hometown, the LIA program preached that homosexuality was sinful and unnatural.

The book then shifts back about one year. As a teenager, Conley developed a deep love of reading and writing, but his father and community viewed these interests as undesirable and effeminate. Conley’s father was a car salesman who was training to be a fundamentalist Christian pastor. In high school, Conley dated a girl named Chloe. Their relationship was chaste and they enjoyed spending time together. However, when they were 18 years old, Chloe wanted to have sex. Conley was unable to go through with the act, and so they ended their relationship.

The book then returns to Conley’s time at LIA. He became friends with a male patient called “J,” whom Conley found charismatic and intelligent. Conley also began to develop romantic feelings for J. As part of therapy at LIA, the patients were required to share all of their homosexual experiences and declare that these experiences were sinful and morally wrong. Conley’s sense of self-hatred grew as this process progressed.

The book then shifts backward to Conley’s arrival at college. He had lost a substantial amount of weight following his breakup with Chloe, because as a form of penance, he began to eat as little as possible and exercise as much as possible. At college, Conley befriended David, a fellow freshman. David was a highly devout Pentecostal Christian. They spent much time together. One day, David raped Conley by forcing Conley to fellate him. In a panic, David then called Conley’s parents and told them that Conley was homosexual. Conley’s parents threatened to stop funding Conley’s education if Conley did not agree to try to change his sexuality. At his parents’ behest, Conley began to attend sexual reorientation therapy every weekend. Conley’s emotional turmoil and self-hatred grew, and he contemplated suicide. He also contemplated leaving to live somewhere on his own, but he did not want to leave his parents.

Conley’s mother took Conley to a doctor to have his hormone levels tested, as Conley’s parents believed that a medical issue might have been causing Conley’s homosexuality. The doctor advised Conley that he should not feel ashamed about being homosexual, but Conley did not heed this advice. The book then shifts focus back to Conley’s time at LIA. A little over a week after he arrived at LIA, he could no longer bear the emotional destructiveness of the program, so he left. His parents continued to fund his education, and they gradually accepted his sexuality.