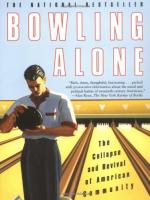 Robert D. Putnam
This Study Guide consists of approximately 40 pages of chapter summaries, quotes, character analysis, themes, and more - everything you need to sharpen your knowledge of Bowling Alone.

This detailed literature summary also contains Topics for Discussion and a Free Quiz on Bowling Alone by Robert D. Putnam.

In Bowling Alone: The Collapse and Revival of American Community, Robert Putnam discusses the decline of social engagement during the twentieth century. Using data from a wide variety of sources, he shows that social capital and engagement have declined in areas such as organizational membership, attending religious services, attending club meetings, and interacting with others face-to-face in communities. He posits several explanations for this decline and argues that generational succession accounts for about half of the overall change. He also examines what the deficit in social capital is doing to individuals, communities, and America. Finally, he discusses how America could reverse the trend and start revitalizing social capital.

Putnam examines a number of different areas to see whether a decline in participation has actually occurred. He finds that political, civic, and religious participation has declined. He also finds that connections in the workplace and with family and friends have declined as well. Volunteering, reciprocity, and trust in others have also declined during the last half of the twentieth century. In doing so, he finds that older Americans are often more engaged than younger Americans. He also finds that small groups, social movements, and the internet have seen increased participation.

Next, Putnam turns to trying to explain the decline in social capital since the 1950s. He argues that financial anxiety and the changing workplace may account for up to ten percent of the change. Sprawl and suburbanization account for another ten percent. Television also accounts for some of the change; however, the largest factor appears to be generational succession. The generation born before WWII is more engaged, while the baby boomers and Gen X'ers are more individually focused and less engaged in society and civics.

The decline in social capital has a number of consequences for society. When social capital is high, children do better in school, neighborhoods are safe, people prosper, the government is better, and people are happier and healthier. A deficit in social capital leads to more suicide, depression, crime, and other social problems.

While increasing social capital is not an easy task, the individuals of the Gilded Age and Progressive Era did just that, forming new organizations and associations that got people involved again. Putnam argues that society can follow this example to right the problem of declining social capital in the United States.

More summaries and resources for teaching or studying Bowling Alone.