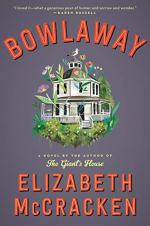 Plot Summary
+Chapters Summary and Analysis
Part 1, "The Found Woman" – "The Oddity"
Part 1, "A Womanhouse" – "We Regret"
Part 2, " An Alley Marriage" – "Conflagrate"
Part 2, "Almost Done" – "Rattled"
Part 2, "Joe Wear Evaporates" – Part 3, "Margaret Overcome"
Part 3, "The Noise of Ordinary Thunder" – "Careful What You Order Through the Mail"
Part 3, "I Had To Take Her Apart to Make Her Fit" – Part 4, "How I Carry On"
Part 4, "He Went Up" – "God and Bowling and Children"
Part 4, "Return to Me" – Part 5, "Among the Artists"
Free Quiz
Characters
Symbols and Symbolism
Settings
Themes and Motifs
Styles
Quotes
Order our Bowlaway Study Guide

Elizabeth McCracken
This Study Guide consists of approximately 61 pages of chapter summaries, quotes, character analysis, themes, and more - everything you need to sharpen your knowledge of Bowlaway.

This detailed literature summary also contains Quotes and a Free Quiz on Bowlaway by Elizabeth McCracken.

The following version of this book was used to create the guide: McCracken, Elizabeth. Bowlaway. Ecco, an imprint of HarperCollins Publishers, 2019.

Part 1 of McCracken’s Bowlaway began with the finding of Bertha Truitt in a frosty Salford, Massachusetts cemetery at the turn of the twentieth century. She was found with a corset, a candlepin, a bowling ball, and 15 pounds of gold. Bertha built the first Candlepin bowling alley in Salford, referred to as Truitt’s Alleys. She hired Joe Wear, to whom she promised ownership of the alley, and Jeptha Arrison, to set the pins. Bertha welcomed women into her establishment, who admired her. She married Dr. Leviticus Sprague, and they had a daughter, Minna. Bertha died tragically in a molasses flood in Boston in 1919 when Minna was 12 years old. Dr. Sprague sent Minna to his family in Canada, escorted by Margaret, their maid.

In Part 2, Dr. Sprague drank and lived in Truitt’s Alleys while Joe ran it, living in the apartment above. Together they built a doll that resembled Bertha. Soon after, Dr. Sprague died in a curiously contained fire in the bowling alley. Although Joe was falsely considered a suspect, there lacked evidence to convict him. Dr. Sprague left a will bequeathing the bowling alley to Bertha’s only descendent, a son, Nahum Truitt. Nahum arrived at the alleys with the intention of expelling women and preaching there. When LuEtta was finally expelled, she agreed to marry Jeptha. In Part 3, Nahum married Margaret, who helped him run Truitt’s Alleys. Joe disappeared, but Jeptha remained working at the Alleys as a pinbody. Margaret soon bore two children, Roy and Arch. Despite her new family, Margaret always maintained her motherly love for Minna, writing to her overseas.

The Nahum Truitts lived in the apartment over Truitt’s Alleys, and soon young Arch found Bertha’s doll. The Alleys began falling apart, and years later, Nahum would admit to himself that he was really Bertha’s first husband. In 1932, Nahum had gambled away their money and fell into immense debt. He left Margaret, who chose to keep the Alleys and train the boys to work there. The Octagon that Bertha built was abandoned against Margaret’s wishes. Minna returned to Salford at City Hall’s request and decided to demolish the house per her father’s wishes. Back at Truitt’s Alleys, 15-year-old Arch invited a ghost hunter to the bowling alley. The ghost hunter’s findings were inconclusive, shattering Arch’s hope for his father’s presence.

Jeptha finally got his wish to die in the Alleys. He had worked at Truitt’s Alleys because he believed Bertha would return, specifically through time travel. Jeptha had taken Bertha’s doll from the Alleys and brought her to his and LuEtta’s business, Arrison’s Arcade. LuEtta brought the doll back after Jeptha’s death, giving Arch hope again. Margaret hired Betty “Cracker” Graham, a 17-year-old girl, to set the pins, and she and Roy developed a romance. Margaret reacted by breaking Roy’s ankles with a bowling ball, and he ran from his family. In Part 4, Arch joined the service during World War II and allowed himself vices, like stealing and romantic affairs. He carried these on even as he corresponded and fell mutually in love with Cracker.

When Roy ran from home, he found Minna in New York, who helped him get a job at a liberal arts college. Roy used this money to fund his studies and eventually became a visiting lecturer at the college. He also enjoyed vices, like breaking into colleague’s offices. Arch invited Roy to his and Cracker’s wedding, which Roy refused. Margaret gave the bowling alley to Arch, who revamped it and renamed it Bowlaway. Arch became a well-known televised bowler in New England. He and Cracker had two daughters, Amy and Brenda, and Margaret continued to live with them in their home, even after their marriage fell apart due to his infidelity. Arch struggled to maintain sobriety, so Margaret and Cracker sent him to live with Roy in western Massachusetts, where the brothers opened another Candlepin bowling alley.

Margaret’s mental faculties eventually deteriorated, and Cracker welcomed Arch home. Going through Margaret’s things, Arch found Bertha’s will from a year before her death, bequeathing Truitt’s Alleys to Joe Wear. Margaret could no longer remember the details of the past, and Arch and Cracker decided to put her in a home. In protest, Margaret exercised her freedom and died on the roof above Bowlaway. Arch drank away his regret, and after bringing a group of young drinkers to the Bowlaway, he was bludgeoned to death by one of them. In Part 5, Roy got in touch with Joe Wear through Minna. Joe was 80 years old and had since lived an artistic life full of love and romance. He decided to see the bowling alley one last time. When he arrived, he told Roy to check Bertha’s safe in the basement. He remembered the code and insisted Roy check the empty safe’s false bottom, which held 12 pounds of gold bars. Joe was finally reunited with Bertha’s doll and decided to take her with him “so they could start again” (371).