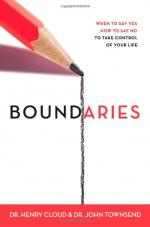 Boundaries: When to Say YES; When to Say NO to Take Control of Your Life Summary & Study Guide

Boundaries: When to Say YES; When to Say NO to Take Control of Your Life Summary & Study Guide Description

Boundaries: When to Say YES; When to Say NO to Take Control of Your Life Summary & Study Guide includes comprehensive information and analysis to help you understand the book. This study guide contains the following sections:

This detailed literature summary also contains Topics for Discussion on Boundaries: When to Say YES; When to Say NO to Take Control of Your Life by Dr. Henry Cloud and Dr. John Townsend.

Boundaries explore the reasons for problems in one's life, such as anxiety, depression and dissatisfaction. The reason for such feelings, according to the authors, is a lack of boundaries. Boundaries allow a person to say no with a clear conscious. A person with proper boundaries, according to this book, possesses a clear view of his or her own responsibilities and desires.

Part one of the book defines boundaries. The reader meets Sherrie, a woman living a life without boundaries. Sherrie struggles in every area of her life, home, work and self. Any reader will see that Sherrie does not have an enviable life. The authors continue by defining certain kinds of boundaries, such as skin, physical distance, and emotional distance.

Dissatisfaction stems from improper boundaries; boundary problems often occur because someone has or meets a person who has a conflicting personality. Nonresponsive, complaints, and controllers are personality types that promote boundary problems. Through extensive descriptions of these personalities the authors seek to help the reader identify these types of people.

This section of the book also explains the ten laws of boundaries, beginning with the law of sowing and reaping. The authors point out that many people do not realize they have a boundary problem because someone else steps in the way and reaps the consequences of that person's wrong actions. Such "protection" hurts both people, just as too many sweets damage one's teeth. Other laws also come into play and deal with things such as power, love, and exposure. Lastly, in this section, the authors dispel common boundary myths, showing that only through proper boundaries can a person truly show love and respect.

Section two looks more deeply and specifically at boundary problems. It looks in depth at the areas of family, friends, spouses, children, work, self, and God. A formula is given for each area to help one identify the boundary issue that may be broken in that area, identify the need that boundary problem signifies, and solve the problem through proper steps and with proper support.

In examining the boundaries one sets with one's children, the book explains the early development of children as it relates to boundaries. Newborns, for instance, learn first about physical boundaries, such as clothes. However, the parent should concentrate at this time on bonding. Throughout the book, the author reminds the reader that bonding comes before boundaries. The steps taken in exploration for becoming more autonomous repeat in adolescence as well, as the child prepares to face the world on his/her own.

Finally, part three sums up ways to develop healthy boundaries. First, the reader learns to recognize resistance to boundaries, which may come from others, in the form of anger, or from inside one's self, in the form of guilt. The authors give eleven steps by which to measure successful boundaries. One first feels guilt and apprehension, but after much practice, boundary enforcement becomes easier and more mature. The book ends with another look at Sherrie, who now has learned the principles of this book. Having applied the principles to her life, all areas previously in chaos now experience improvement. She receives a promotion at work when she stops taking responsibility for others. Her marriage and home life improves when she sets forth honest boundaries with her husband and children. She exemplifies a success story for the principles of the book, after much hard work.

Boundaries: When to Say YES; When to Say NO to Take Control of Your Life from BookRags. (c)2022 BookRags, Inc. All rights reserved.