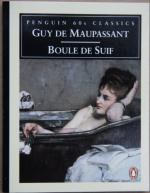 A Life: The Humble Truth, by Guy de Maupassant, was originally published in 1883. The book chronicles the life of a Norman woman whose kindliness is both a virtue and a vice.

Bel-Ami (1885), by Guy de Maupassant, depicts the life of a journalist lacking moral scruples, whose success is built upon hypocrisy, lecherousness, and corruption.

Pierre et Jean, by Guy de Maupassant, was originally published in 1888. The book is crafted around the psychological study of adultery involving a young wife and two brothers.

Madame Bovary, by Gustave Flaubert, was originally published in two volumes in 1857. In a depressing, but rich, tale of adultery and...