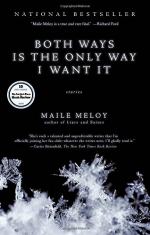 Meloy, Maile
This Study Guide consists of approximately 39 pages of chapter summaries, quotes, character analysis, themes, and more - everything you need to sharpen your knowledge of Both Ways Is the Only Way I Want It.

Both Ways Is the Only Way I Want It Summary & Study Guide includes comprehensive information and analysis to help you understand the book. This study guide contains the following sections:

This detailed literature summary also contains Quotes and a Free Quiz on Both Ways Is the Only Way I Want It by Meloy, Maile .

The following version of this book was used to create this study guide: Meloy, Maile. Both Ways Is the Only Way I Want It. New York, Riverhead Books, 2009.

Both Ways Is the Only Way I Want It is a collection of short stories by author Maile Meloy. The story “Travis, B.” follows a 22-year-old man named Chet Moran who lives a lonely life as a ranch hand in rural Montana. One day, he begins to develop romantic feelings for a 25-year lawyer named Beth Travis who commutes from a fairly distant city to teach a night class. They have a few meals together, but Beth eventually stops teaching the class. Chet eventually expresses his feelings to her in person, but it is unclear if she feels the same way about him.

In the story “Red from Green,” Sam Turner is a 15-year-old girl whose father and uncle are both lawyers. One day, she goes on a camping trip with her father and uncle, as well as with a client of theirs named Layton, whom they are attempting to convince to remain as a plaintiff on a class-action lawsuit. Layton makes sexual advances towards Sam, and Sam’s father does not intervene. Sam does not reciprocate the advances, and Layton drops out as a plaintiff.

The story “Lovely Rita,” takes place in the mid-1970s. Steven Kelly is 23 years old when he begins working at a nuclear power plant that recently opened in his childhood hometown. Also working at the plant is Acey Rawlings, a friend from high school. Acey begins dating a local woman named Rita Hillier. After Acey dies in a workplace accident, Rita sells raffle tickets for a sexual encounter with her. She uses the raffle money to hire a private investigator to find her father, but the investigator merely takes the money and does nothing. Rita decides to leave town, and Steven feels a freeing sense of alienation regarding the town.

In the story “Spy vs. Spy,” Aaron is a married doctor whose daughter Claire is in college. Aaron’s younger brother George invites Aaron and his family on a ski trip with him. Aaron dislikes George, and during the trip, George asks Aaron many uncouth, invasive questions. Aaron and George eventually have a brief fistfight, but much to Aaron’s chagrin, George shows no desire to even become estranged from Aaron and his family.

In “The Girlfriend,” Leo is a married, middle-aged many whose daughter Emily was raped and killed by a young local man named Troy Grayling. After Troy is convicted, Leo has a secret meeting with Troy’s girlfriend Sasha, as Leo wishes to acquire a full account of the events surrounding Emily’s murder. Sasha says that Troy did not plan to murder Emily, but when he saw police cars called by Leo, Troy panicked and killed Emily. Leo decides to accept this account of events, as he believes that it is better than having no story at all.

In the story “Liliana,” the unnamed narrator is a man middle-class man living in Los Angeles with his wife and children. One day, his estranged grandmother Liliana suddenly arrives for a visit. She is a wealthy English woman, and she seems to disapprove of the narrator’s life. As Liliana leaves, the narrator realizes that she has likely dismissed him from her life completely.

In “Nine,” the story is told from the perspective of a nine-year-old girl named Valentine. She is raised by her divorced mother, Gwen. Gwen begins dating Carlo, a man who teaches Italian at a local college. As Valentine bears witness to Gwen and Carlo’s relationship, she begins to develop proto-romantic feelings for Carlo’s ten-year-old son Jake. Carlo and Gwen eventually break up after Carlo is fired from is job and becomes highly possessive of Gwen. After the break-up, Carlo vandalizes Gwen’s vegetable garden and steals several items from her home.

The story “Agustín” follows an aging, widowed aristocrat named Agustín. He was born in Argentina and still lives there. One day, he learns that Inez Martín—with whom Agustín had a passionate love affair following his wife’s death—has taken a job nearby. Agustín tries to court her, but she is married and rejects his advances. Agustín then returns home to his lonely life in a state of sadness and despair.

In the story “The Children,” Fielding is a middle-aged man who is married with children. He is having an affair with a local woman named Eleanor, and he is unable to decide if he should end his relationship with Eleanor or if he should leave his wife to be solely with Eleanor. Feeling trapped by this dilemma, Fielding desperately wishes he could have a relationship with both women and suffer no consequences.

In the story “O Tannenbaum,” Everett is a married man who has a four-year-old daughter. Everett, his wife Pam, and his daughter Anne Marie are driving home form acquiring a Christmas tree when they notice two hitchhikers. Everett decides to give them a ride. The hitchhikers—who are coincidentally named Bonnie and Clyde—argue in the car, as Clyde is currently having an affair with another woman. Everett once committed sexual infidelity when Pam was pregnant. Everett and Pam eventually invite Bonnie and Clyde to come to their house for the evening. Sexual tension arises between Everett and Bonnie, and possibly also between pam and Clyde.

More summaries and resources for teaching or studying Both Ways Is the Only Way I Want It .

Both Ways Is the Only Way I Want It from BookRags. (c)2022 BookRags, Inc. All rights reserved.