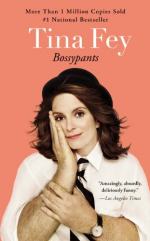 Summary
+Chapters Summary and Analysis
Introduction – “That’s Don Fey”
“Climbing Old Rag Mountain” – “The Secrets of Mommy’s Beauty”
“Remembrances of Being Very Very Skinny” – “Dear Internet”
“30 Rock: An Experiment to Confuse Your Grandparents”
“There’s a Drunk Midget in My House” – “What Should I Do With My Last Five Minutes?”
Important People
Objects/Places
Themes
Styles
Quotes
Topics for Discussion
Order our Bossypants Study Guide

Tina Fey
This Study Guide consists of approximately 32 pages of chapter summaries, quotes, character analysis, themes, and more - everything you need to sharpen your knowledge of Bossypants.

The scar that runs across Tina’s face is one of the things that Tina most hates being asked about, and which Tina explains has no symbolism. Tina says that being asked about the scar says more about the person asking than about Tina herself, because everyone who asks tries to read something into it that it is not. The scar is the result of a random stranger slashing Tina’s face in the alley behind her house one night, for which her father rushed her to the hospital to be treated.

Summer Showtime Theatre was a local theatre program for kids, teens, and young adults founded in 1976 by Larry Wentzler, a young Catholic family man. Summer Showtime is described as a successful implementation of Christianity, for the program involved kids of all kinds, and especially became a refuge for gay kids. Tina spent...

More summaries and resources for teaching or studying Bossypants .