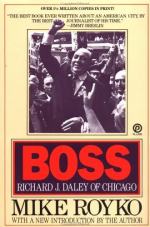 This detailed literature summary also contains Topics for Discussion and a Free Quiz on Boss: Richard J. Daley of Chicago by Mike Royko.

Boss, Richard J. Daley of Chicago by Mike Royko is the life story of Mayor Richard Daley, tracing his modest beginnings on the South Side of Chicago in the Bridgeport neighborhood to his rise as a powerful politician. Daley was born in 1902 and was the only child of Michael and Lillian Daley. It was a quiet household which some attributed later to Richard's difficulty in communicating. He didn't have siblings to talk to early in life. Even after his very public life, he often had a hard time expressing himself. Daley was a shy, retiring child who was not a standout in academics nor in sports. However, even in his early years, some schoolmates saw leadership qualities and an elusive charisma that both proved to be crucial later in his career. Most children from Bridgeport did not wind up in college. For his high school education, Richard's parents sent him to a school run by the Christian Brothers, where he learned office skills and discipline and order. After graduating, he wound up with his first city job. He would stay on the government's payrolls for the next forty-eight years, twenty of those years as Mayor of Chicago.

While one would think the title "Boss" would refer to his mayoral career, it more appropriately was a reference to his long-term control of the powerful Chicago political machine. As head of the machine, he knew everything about everyone in the Democratic party. He had control of the money and the thousands of patronage jobs that he handed out like candy in return for bringing in the vote. The machine presided over the ward bosses, precinct captains and the voters. The Boss controlled the Machine with a selfish fervor. He made the unusual move of maintaining chairmanship of the Illinois Democratic Party (The Machine) even after he became mayor. He was well aware that the Machine held more power that the position of mayor. At one time, he was considered the most powerful man in Illinois and the second most powerful man in the nation, just behind President John F. Kennedy.

The story of Richard J. Daley reveals an undeniable parallel between the man and the city. Daley excelled in the rough politics in the notoriously corrupt Chicago. Would he have been as successful in another city or state? Perhaps not, but Daley was the perfect match for Chicago. He was a man whose less than pure ethics was understood by Chicagoans. Perhaps he wouldn't have been as understood and accepted in another environment. Although he dealt with known corruption, Daley operated within a strange dichotomy, a parallel universe. While he was not known to take a dime, he operated with others who did. As boss, he would just tell them not to get caught. He was a devout Catholic who attended mass every morning yet he allowed the poor to suffer for years in inadequate housing and under brutal police abuse.