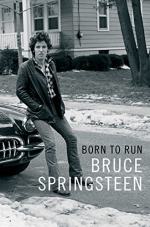 Bruce Springsteen
This Study Guide consists of approximately 58 pages of chapter summaries, quotes, character analysis, themes, and more - everything you need to sharpen your knowledge of Born to Run.

Bruce Springsteen is born and raised in Freehold, New Jersey. He is form a working-class Irish-Italian family and his upbringing is heavily influenced by Catholicism. He is pampered and over-indulged by his grandmother but his home life is negatively compromised by his father’s alcoholism and undiagnosed mental illness. From a young age, Bruce is interested in music and seeks to emulate superstars like Elvis Presley and The Beatles.

Without much money to invest in a good guitar or music lessons, Bruce works hard to afford his first instrument and teach himself to play. He starts playing in bands as a teenager and slowly works his way up in the local New Jersey music scene. After several unsuccessful attempts at getting discovered and taking his music career to the next level, Bruce meets a New York producer named Mike Appel.

Through Mike’s introductions, Bruce gets a three-album deal with Columbia Records. While his first two albums do moderately well, his third record “Born To Run” makes him a mainstream success. His career and status as a rock icon continue to rise, and peak after the release of his seventh album “Born in the USA” which catapults him to superstardom.

Through his music, Bruce explores questions of what it means to be American and the plight of the working-class. He also explores themes of love and relationships, particularly in his mid-career. He blends the personal and political in his music by addressing broad social topics through narrative storytelling.

In his thirties, Bruce becomes concerned with question of home, marriage, and family. At the same time, he begins to struggle with serious depression and anxiety, conditions he has likely inherited from his father. Bruce realizes that his difficult relationship with his father has led him to build defense mechanisms and unhealthy psychological habits which are preventing him from having the home and family life he is now beginning to desire. Bruce begins therapy and, in his mid-thirties, marries a woman named Julianne.

Bruce’s anxieties and depression sabotage his first marriage and he soon begins a serious relationship with Patti Scialfa, a singer in his band. Bruce’s relationship with Patti finally enables him to work through some of his more serious issues and they forge a lasting commitment and bond. In the early 1990s, Bruce and Patti get married and have three children.

Bruce’s career success allows him to get involved in social activism in a more direct way. Over the second half of his career he works in support of Vietnam War veterans, 9/11 survivors, and Amnesty International. Other career highlights include being inducted to the Rock and Roll Hall of Fame in 1999 and performing at the Super Bowl halftime show in 2009. He also wins an Oscar in 1994 for a song he wrote for the film “Philadelphia”.

In his sixties, Bruce continues to write new albums and perform across the globe. Serious bouts of depression recur in the early part of this decade but Bruce recovers with the help of Patti and the right medication. After a forty-five-year career, Bruce hopes that, through his storytelling, his as enabled his audience to connect to their shared narrative and feel empowered enough to go tell their own stories.

More summaries and resources for teaching or studying Born to Run: Biography.