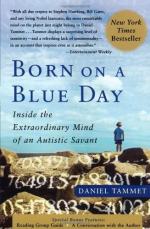 Born on a Blue Day: Inside the Extraordinary Mind of an Autistic Savant Summary & Study Guide

Daniel Tammet
This Study Guide consists of approximately 28 pages of chapter summaries, quotes, character analysis, themes, and more - everything you need to sharpen your knowledge of Born on a Blue Day.

Born on a Blue Day: Inside the Extraordinary Mind of an Autistic Savant Summary & Study Guide Description

Born on a Blue Day: Inside the Extraordinary Mind of an Autistic Savant Summary & Study Guide includes comprehensive information and analysis to help you understand the book. This study guide contains the following sections:

This detailed literature summary also contains Topics for Discussion and a Free Quiz on Born on a Blue Day: Inside the Extraordinary Mind of an Autistic Savant by Daniel Tammet.

Daniel Tammet is a savant. He is a high functioning autistic with Asperger's syndrome and has an extraordinary mind, especially for numbers. Daniel tells the story of his life from the time of his birth until the present day. His tale is certainly amazing given the potential obstacles that he faced and his own personal frustrations with socialization and disruptions to established routines. Born on a Blue Day tells the story of a man who seems to ignore the stigma attached to his disability and pursues a life that is both profitable and perfectly comfortable for himself.

Daniel is born in the late seventies in England, before much was known about savant syndrome. As the first born, he is cherished and encouraged by his parents, even as he develops several idiosyncrasies that are unusual for a developmentally normal child of his age. As an infant, Daniel cries incessantly and there is little his parents can do to calm him. During his toddler years, Daniel develops the habit of banging his head against a particular wall in the living room until he is moved to another location. Throughout all his developmental years, Daniel remains anti-social, preferring the comforting solitude of his room to the noisy play of neighborhood children.

When Daniel starts his school years, he quickly realizes that routines are extremely calming but that the slightest deviance from an established routine can cause him endless frustration. Daniel also discovers that numbers are fascinating things and he develops a peculiar relationship with them; he sees numbers in the form of shapes and colors. This phenomenon is called a synesthetic experience. The association of a visual aide with a number enables Daniel to have an amazing talent for learning and solving mathematical problems. He also has an incredible capacity for learning new languages quickly and fluently.

As Daniel ages he continues to pursue the things that interest him most: numbers, books, and languages. He eventually realizes that he is lonely and longs for companionship; however, this realization occurs during adolescence when he discovers that his sexual preference is for other boys. Daniel's sexual orientation and lack of socialization skills makes meeting and keeping friends difficult until he has graduated school and accepts a volunteer position in Lithuania.

Daniel's nine month commitment in Lithuania teaches him a great deal about his own capabilities and about the things he desires in life. During his stay, he meets several other gay men and forms close friendships with them. Daniel also learns to cope with new people and situations without the comforting encouragement of his family. He matures immensely over the course of his stay in Lithuania and returns to England ready to take on whatever challenges the world has to offer. Soon after his return home, Daniel meets Neil in an online chat room and the two quickly fall in love. Daniel then decides to move in with Neil. Together the two are able to create an Internet based company that teaches foreign languages. The company allows Daniel to earn an income and at the same time work from the safety of his own home.

Daniel continues to mature and show the world that savants are capable of more than most people suspect. He memorizes over 22,000 digits of pi for a charity event and is then contacted to star in an American documentary. The filming requires that Daniel fly to America and travel the country for several months with the production crew. During the course of filming, Daniel meets a prominent scientist in the field of autism research, plays blackjack in Las Vegas, and meets the real-life inspiration for the movie Rain Man. Following the success of the documentary, Daniel is invited to appear on the David Letterman show. Daniel then returns to his "normal" life in England, where he continues to assist researchers and speak about his syndrome. Over the course of the book, the reader will see Daniel change from a clinical sounding young man into a passionate and loving adult. Daniel's story shows readers that the only difference between someone who has a disability and someone who does not is the way others choose to treat them.

More summaries and resources for teaching or studying Born on a Blue Day: Inside the Extraordinary Mind of an Autistic Savant.

Born on a Blue Day: Inside the Extraordinary Mind of an Autistic Savant from BookRags. (c)2022 BookRags, Inc. All rights reserved.