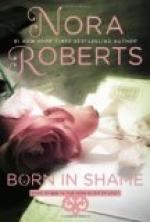 Nora Roberts
This Study Guide consists of approximately 32 pages of chapter summaries, quotes, character analysis, themes, and more - everything you need to sharpen your knowledge of Born in Shame.

This detailed literature summary also contains Topics for Discussion on Born in Shame by Nora Roberts.

Born in Shame by Nora Roberts opens with Amanda confiding in her daughter Shannon. Amanda is deathly ill from cancer, and decides to tell Shannon the secret that she has kept for years—-that Shannon's biological father is not Colin Bodine, but Thomas Concannon, a married Irishman with whom she had a passionate affair. Just before she dies of cancer Amanda confesses the secret to Shannon, who is shocked and angry. Shannon's biological sisters in Ireland send her an invitation to stay with them in their bed and breakfast, and after thinking it over Shannon accepts. She immediately butts head with sister Maggie, but finds Brianna kind and appreciates her hospitality. Though Shannon is still reeling from her mother's death and the truth about her parentage, she tries to give Ireland a chance, telling herself to enjoy a vacation at the very least. Murphy, nearest neighbor to Blackthorne Cottage, is struck dumb by recognition the first time he meets Shannon: he knows he has seen her before. Though Shannon is resistant to the idea of being in a relationship with Murphy, she cannot deny her attraction to him, and they both eventually succumb to their shared passion. Meanwhile Shannon must deal with the contentious Maeve Concannon, her responsibilities back in New York, and navigate her new relationships with her sisters and brothers-in-law. Shannon also rediscovers her love of painting, and is offered a contract for her work from Rogan. She is torn between the life she worked so hard to build in New York, and everything being offered to her in Ireland—-including her love for Murphy. Finally Shannon decides to sign the contract and is set free from her need to control: she finally admits she loves Murphy, and purchases a hammer dulcimer for him. He is enamored with the gift upon her return and they love each other. The next day the whole family goes to the Worldwide Gallery in Clare to see Shannon's work on display. She offers to purchase one of Maggie's pieces and is shocked when Rogan gives it to her. She asks for it to be shipped to New York, which upsets Murphy because he thinks she has decided to stay in Ireland. He proposes to her in the stone circle and she tries again to explain why she cannot stay, but they part ways very upset. That night Shannon paints furiously from dusk until dawn, and after sleeping all day she asks to see the letters between Amanda and Tom. Her mother's letters open her eyes to everything, and she is awed at what Amanda went through for her unborn child. Shannon takes the painting and meets Murphy in the stone circle, where they share their accounts of the vision and she gives him the painting she made of it the night before. He offers to sell the farm and lands and go to New York with her, but Shannon reveals she has decided to stay in Ireland. She wants to continue to paint, and more than anything to be his wife.

More summaries and resources for teaching or studying Born in Shame.

Born in Shame from Gale. ©2005-2006 Thomson Gale, a part of the Thomson Corporation. All rights reserved.