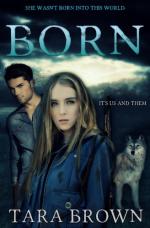 Born is the first book in a trilogy by author Tara Brown. The novel follows 19-year-old Emma as she navigates a world filled with disease and danger 10 years after the United Nations initiated a series of events that have devastated the planet. Initially a loner, Emma gradually gathers a circle of trusted friends and decides to take action rather than merely survive.

Emma has been alone in the 10 years since 2012, when her father died just as the world was collapsing as the result of a series of environmental disasters and man-made evil. The powers that have taken over the world are trying to create a new race of perfect people by carefully breeding out disease and weakness, and women Emma’s age are in constant danger of being captured and taken to breeder farms, where they are forced to bear children. Other dangers abound, including people who have been infected by a deadly plague and wander the earth seeking victims of their own.

The daughter of a survivalist, Emma has vowed to take care of herself and help no one until a young girl named Anna knocks at her door one night seeking help for her brother Jake, who has fallen into a deep hole and injured his leg. Emma reluctantly helps, but soon finds herself drawn to the pair and realizes she is lonely.

After being captured by men who plan to sell her to the breeder farms, Emma meets another young captive named Meg and the two escape together, but when they arrive at Emma’s farm house, they find that Jake and Anna have been captured. As they search for them, they come upon a camp run by Jake and Anna’s brother Will, who has been thought dead, and learn that the group is planning a rebellion. Jake is eventually found, but Anna has been taken to a breeder farm, so Emma hatches a plan to allow herself to be captured in order to rescue her friend.

On the way to the farm, Anna meets Sarah, a very young girl who is terrified and latches onto her. Once inside, they find that the facility is pristine and something of a haven from the difficulties of their normal lives, but they also learn that although it is common knowledge that the women are given comfortable lives in the city after they have borne three children, the truth is that they are killed. With the help of an old friend of her father’s and a friendly nurse, Anna,

Emma and Sarah escape by hiding in a garbage truck filled with dead bodies and return to the camp.

Throughout these events, Emma has been torn between feelings for Jake, who is sweet and funny, and Will, who is more challenging. Both seem to be pursuing her, but her years of isolation have not given her the tools she needs to sort out her feelings, although she eventually realizes she is in love with Will.

Emma is haunted by what she learned at the facility and decides to stage a raid on the breeder farm and free the women and children. With the help of Will and others, she is successful, so Marshall, who runs one of the rebel camps, asks her to raid other farms as well. During the first such raid, she and others manage to get inside, but as she is about to implode the building, she is shot with a tranquilizer dart and before she blacks out, she sees Marshall’s face hovering over her.