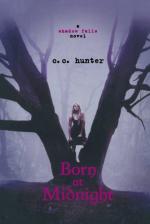 C. C. Hunter
This Study Guide consists of approximately 35 pages of chapter summaries, quotes, character analysis, themes, and more - everything you need to sharpen your knowledge of Born at Midnight.

This detailed literature summary also contains Topics for Discussion and a Free Quiz on Born at Midnight by C. C. Hunter.

Kylie Galen is sixteen as the story opens. Her father is moving out of their house, leaving Kylie and her mother behind. Kylie is sad that her father would leave her alone with her mother, who Kylie calls the "Ice Queen." Kylie begs him to take her but he refuses, saying Kylie's mother needs her. Kylie has recently had night terrors and she sometimes sees a man in military uniform that no one else seems to see. On the night her father leaves, Kylie goes to a party with her friend, Sara. There is alcohol and drugs and Kylie is angry that Sara knew Kylie's ex-boyfriend, Trey, would be there with his new girlfriend. The party is broken up by the police and Kylie has to call her father from jail. However, her mother comes to pick her up and announces that Kylie is going to be sent away to a summer camp for troubled teens.

There, Kylie learns the other campers are all supernaturals, ranging from werewolves and vampires to witches and fairies. Kylie is quickly singled out as an anomaly because her mind is closed to the others. She is forced to accept the fact that there are supernaturals when one of the shapeshifters turns into a unicorn on command. Kylie is roommates with a witch, Miranda, and a vampire named Della. While she's initially afraid of both she soon discovers they are - in some ways - typical teenagers struggling to deal with their lives and families, just as Kylie is. Miranda is dyslexic and that handicap is threatening her family's place in their coven. Della's parents don't know she's a vampire and believe she must be on drugs. Meanwhile, she's being urged by her cousin to break ties with her family and join a group of rogue vampires.

Kylie soon becomes involved with two boys though she isn't certain either has her best interests at heart. One may have killed Kylie's cat when they were younger and the other may be manipulating her emotions to make her feel things she doesn't really feel. Meanwhile, Kylie continues to try to figure out why she can see a ghost and whether she is also a supernatural. She initially hopes to prove she isn't one of them but is soon connected with her new friends in a way that makes her hope she is a supernatural.

When Kylie realizes the fate of the camp is in danger, she and her friends set out to discover who is killing off exotic animals at a nearby refuge. While solving this mystery Kylie comes to learn things about herself and her family. She learns the ghost who has been with her for months is actually her biological father and that he wants her to know he was glad to learn he was going to be a father. She also learns that he had supernatural powers and is, therefore, the source of her own power. She learns that her father isn't the wonderful person she'd thought and that her mother isn't as cold as Kylie had believed. Finally, she learns that she has more in common with vampires and witches than she'd thought and that her place is at the camp.