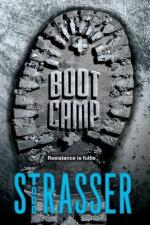 Todd Strasser
This Study Guide consists of approximately 27 pages of chapter summaries, quotes, character analysis, themes, and more - everything you need to sharpen your knowledge of Boot Camp.

"Boot Camp" is a novel by Todd Strasser. In this novel, Garrett has been sent to boot camp because his parents feel that his behavior has been out of control. Garret has only been going to school a few days a week, he has stolen money from his parents, and he has been romantically involved with a woman who was his teacher. Garrett feels that most of his behavior is simply a difference of opinion with his parents. However, this does nothing to save Garrett from the dark, sadistic treatment he receives at boot camp. "Boot Camp" is an eye opening, fictional account of the secret network of boot camp's designed to imprison teenagers throughout the United States.

Garrett is kidnapped out of his own home one night and taken to a boot camp in upstate New York. Garrett is taken into a room and forced to stand for hours until a man comes with new clothes for him to wear. Garrett is forced to strip in front of several strangers, searched, and redressed in the uniform of the boot camp. Garrett then sleeps for a short time before being taken to the head of the boot camp where he is given a list of the rules. Garrett takes a test over the rules, surprising everyone by passing the test less than forty minutes of studying the rules, and is placed in his family group.

Garrett is picked on by his group leader, his 'father', the first few months of his time at boot camp. Garrett is sent to TI, Temporary Isolation, multiple times and forced to lay on bare concrete for upwards of a week. Despite this, Garrett continues to be sympathetic toward his fellow inmates, including a young boy named Paul whom Garrett saves from bullies one night, causing him to be placed in TI again.

As time passes, Garrett keeps hoping that his parents will come to their senses and take him home. However, when Garrett's dad comes for a visit, Garrett's 'father', Joe manages to make the boot camp look almost like a summer sports camp, complete with a gymnasium and television room that Garrett has never even set foot in until his dad's visit. When his dad leaves, Garrett begins to lose hope.

Paul approaches Garrett with a plan for escape. At first Garrett resists the idea, aware of what would happen if he tried to escape. However, soon after Garrett is attacked in the bathroom by a group of his fellow family members, Garrett finds himself in the middle of an escape, forced to help or turn Paul in. Garrett, Paul, and a girl named Sarah, manage to escape the camp when fire trucks come to put out a fire Paul started. In their escape, Garrett is forced to restrain Joe when Joe manages to follow them out and attempt to stop them. Garrett wants to hurt Joe, but instead Paul talks him into tying Joe up with duct tape.

The first day Garrett and his friends are on the run they hitch hike, taking rides first from a guy in a pickup and later in a semi. However, when they stop at a truck stop, Garrett recognizes the bounty hunters who kidnapped him and brought him to the camp. Realizing these people are searching for them, Garrett and his friends begin to travel by foot at night. By the time they reach the border with Canada, Paul is sick and Sarah has injured her foot.

Garrett is returned to the boot camp where he is repeatedly beaten and tortured. Finally Garrett begins to conform to the rules of the boot camp. Then Garrett's parents arrive with a lawyer after having been told the truth by one of the bounty hunters. However, Garrett has been beaten so badly and so often that when asked about his treatment at the camp, Garrett claims that he deserved all he got.

More summaries and resources for teaching or studying Boot Camp.