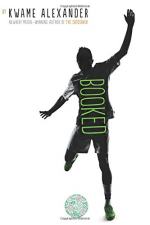 This detailed literature summary also contains Quotes and a Free Quiz on Booked by Kwame Alexander.

Nick’s story begins on a day when everything seems to be relatively normal: he sleeps late, after playing on-line soccer into the night; his parents are arguing; and he is caught daydreaming in school. Narration reveals that Nick’s father is a writer, and has published a dictionary of unusual but meaningful words, a dictionary that he wants Nick to memorize (throughout the book, examples of those words and their definitions appear in the text). Narration also reveals that Nick’s mother loves horses, and has been invited to work with high-level racing horses in another state. Her decision to take the job (partly because things are difficult between her and Nick’s father) triggers the first major change in Nick’s life: the realization that his family is no longer a unified one.

Meanwhile, Nick’s regular school routine continues, albeit in a more unfocused way than usual, given that the girl he has a crush on (April) seems to like him back. Complicating this situation is the presence of the bullying Eggleston twins, one of whom (Don) sees April as his girl, and bullies Nick out of spending more time with her.

Throughout all this, Nick develops an unlikely friendship with Mr. MacDonald, the school librarian and a former rap producer who encourages the reluctant Nick to read. Nick also continues to practice soccer, preparing to go with his team to an important tournament in Texas. He is joined in his love of the game by his buddy Coby, a mixed-race immigrant who plays for a rival team; who encourages Nick in his attempts to spend time with April; and who is also on the receiving end of bullying from the Egglestons. Coby, however, fights back, unlike Nick, who continues to feel victimized by the Egglestons, by his seemingly cold father, and by his parents’ divorce.

Nick’s struggles to cope with all of these changes in his life become even more complicated when he develops a perforated appendix, a situation that leads to emergency surgery that keeps him out of the tournament in Dallas. In the aftermath of the surgery, his mom comes back home to live with him and his dad again, and for a while Nick believes that his parents are going to get back together. But just when he is getting ready to go back to school and resume his routine, his parents announce that they are getting a divorce. Nick reacts with anger and frustration.

Eventually, as Nick grows physically stronger (in the aftermath of his surgery) and mentally stronger (in response to Mr. MacDonald’s support, Coby’s encouragement, and April’s attention), Nick gets up the nerve to fight back when the Egglestons bully him yet again. He does not win the ensuing fistfight, but he does find a new feeling of courage and hope for the future, both of which are represented by the mysterious Dragonfly Box given to him by Mr. MacDonald. As the story concludes, Nick opens the box (named “Freedom” by Mr. MacDonald), and shows Coby its contents. The narrative never reveals what those contents are.