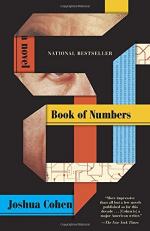 This detailed literature summary also contains Quotes and a Free Quiz on Book of Numbers by Joshua Cohen.

The following version of this book was used to create the guide: Cohen, Joshua. Book of Numbers. Random House, 2015.

Cohen divides Book of Numbers into three parts: “1.1,” “0.161,” and “1.419.” At least, this is how they are labeled in the Table of Contents. Readers should take note that, within the book, these pages are marked as “1,” “0,” and “1.” This decimal simplification will likely prompt readers to search for the meanings of these numbers, which is at the heart of the entire story.

The novel kicks off with Joshua Cohen (which is a fictionalized, slightly older version of the author to whom this guide will refer as Cohen the Narrator to avoid confusion) directly telling the reader that he is writing “a memoir, of course – half bio, half autobio” of another man, who is later introduced as another Joshua Cohen (5). The other Cohen is referred to as “Principal” throughout the narrative, which is a term that biography writers use to refer to their subjects.

Cohen the Narrator was once an aspiring author. A New Yorker who experienced the events of September 11, 2001 up close, Cohen the Narrator becomes unable to write and becomes increasingly cynical. He ends up working as a ghostwriter and critic, predominantly taking on books of Jewish authors like Edward Said and Nicole Krauss.

Cohen the Narrator’s big break comes when he receives an email asking if he would interview Joshua Cohen, who is referred to as “Principal” throughout the rest of the story. Principal is one of the co-founders of Tetration, a $22 billion-dollar software company that functions as a fictional amalgamation of Google, Microsoft, and Apple throughout the story.

Principal, who always refers to himself in plural first person, whisks Cohen the Narrator away to Palo Alto, California, then Dubai. There, he meets Kori “Kor” Dienerowitz, President of Tetration. Kors seems poised to overtake Tetration once Principal passes away from terminal pancreatic cancer.

Principal wants Cohen the Narrator alone, so he again takes Cohen the narrator away. This time, they stay at Hotel Palace Khaleej in Abu Dhabi where Cohen the Narrator tries to rescue an Arab woman named Izi from her abusive husband. He tracks Izi to a mall and marks her with his hand using chalk so that he can tell her apart from other abaya-clad women. This is where the first part of the novel ends and “0” – Principal’s narrative – begins.

Principal’s narrative voice gains dominance as he speaks on the rise of computer technology, the death of his father (whom he refers to as D-Unit), his mother’s (M-Unit’s) lesbian relationship with Aunt Nance (who isn’t his aunt), and the founding of Tetration with Cull and Qui (his Stanford roommates). After his father’s death, Principal isolates himself in his father’s apartment and develops the algorithm (algy) that leads to the founding of Tetration in 1996. The name, Principal says, was meant to “represent our automaticity, to symbolize our selfgeneration” (233). In other words, Tetration is a digitalized, online search for the self.

It is after this, in the early start-up days of Tetration, that Principal meets “Moe,” whose “name was but was not Muwekma Ohlone” (235). Moe becomes the company’s chief engineer due to his hardware ingenuity. An Indian immigrant living in America, Moe has been broken down by the capitalist system dominated by white men. By 1990, Moe had invented 108 remotes and was the only engineer left at his company working on the Amote. The company gets raided by the FBI for trafficking, and Moe evades capture by hiding.

The narrative then skips forward to 1997, when Principal meets Moe in Las Vegas. Moe tells Principal about his plan to garner enough money to employ handicapped and elderly Native Americans. In turn, Moe unwittingly becomes “the victim of the first nonsimulated living breathing execution” of Principal’s algy (258). This leads to the development of Adverks, an online advertising system based on Moe’s insights on billboards he sees. Therefore, Moe becomes a partner of Tetration, and the company is in “True Beta,” which, according to Principal, “is life. Is human” (298).

It is Adverks that garners the company a lot of initial attention, which amps up around the turn of the millennium, otherwise known as Y2K. After being forced to work on a project referred to as STrapp, Moe disappears. Moe later hacks into Tetration’s website and posts a long message exposing Tetration’s shady misdeeds. Moe apparently commits suicide after this.

As time goes on, Principal finds himself caught up in Moe’s philosophy of hardware being Hindu – “an integrated system” – and Buddhism, the “repetitive series of flawed instructions” (372). He also becomes a target for Thor Ang Balk, a Scandinavian hacker (and owner of the b-Leaks website) who is trying to expose Tetration’s mass surveillance cooperation with numerous governments around the world.

The novel concludes with Cohen the Narrator’s home computer being lifted by Malekson (an undercover FBS officer trying to infiltrate b-Leaks), Kor retiring to Bermuda so as to not be prosecuted, Principal’s body being discovered in a drainage ditch in Goa, and Principal’s “medimorial” at Tetplex getting crashed by “A dozen Moes” (579). As he concludes the narrative, Cohen the Narrator turns 40.