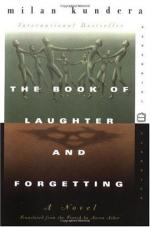 The Book of Laughter and Forgetting Summary & Study Guide

Milan Kundera
This Study Guide consists of approximately 35 pages of chapter summaries, quotes, character analysis, themes, and more - everything you need to sharpen your knowledge of The Book of Laughter and Forgetting.

The Book of Laughter and Forgetting Summary & Study Guide Description

The Book of Laughter and Forgetting Summary & Study Guide includes comprehensive information and analysis to help you understand the book. This study guide contains the following sections:

This detailed literature summary also contains Related Titles and a Free Quiz on The Book of Laughter and Forgetting by Milan Kundera.

Throughout the novel, the theme of laughter, memories and the past are explored in a variety of vignettes that cover these themes in different manners. Through the main character Tamina and the other sub-characters, these concepts are analyzed and interpreted through the character's actions, thoughts and impulses.

The novel begins with a man named Clementis leaving his fur hat on a political colleague's head, which later becomes the only symbol that he ever existed. With this idea in mind, the novel continues to analyze how the past impacts the current lives of many of his characters. For Marketa and Jan, for example, their love relationship is established in the first few weeks of knowing one another. He is a woman chaser and she is the martyr, making him feel guilty for his action. It is because of this foundation that Eva can suggest Marketa come visit her and her husband without fear of reproach from Jan because the foundation of their relationship has been established that Marketa will always have the suspicions and Jan will not. Therefore, Marketa can have an affair without worry that Jan will suspect a thing. When Jan becomes older, he will define his relationships with women by a border, which is defined by the number of times he has repeated a specific act.

Tamina lives in the past and through the memories of her late husband throughout the novel. She becomes like the country of Czech in that both she and the country start to lose their memories and in doing so, lose their definitions, identity and contours. Tamina works to restore her life by gaining control over lost love letters and notebooks, but when this fails, she gives up. In the same way, the country of Czech with its fluid, elusive memories is a country whose people do not have a single collective memory together and for this reason, do not have a strong sense of national identity.

Laughter and acceptance or mockery is another important theme. Laughter is either a rejoicing tribute to something that has happened or an inappropriate tool of the devil (such as in Passer's funeral). When individuals come together to celebrate and sing, laughing with each other in a ring dance, their inclusivity makes them one unit, floating towards the sky and towards the angels. However, outside the ring dance the individual can fall and fall victim to the devilish laughter of inappropriateness.

Tamina may be the main focal point of the novel, but the other characters work to provide a solid counterpoint to her actions. The student, for example, demonstrates the principle of litost that Tamina also exhibits in her life. Meanwhile, the lost letters of Mirek provide a good contrast to her own life's search for the letters from her husband—albeit from a wholly different viewpoint. Finally, the relationships of Jan and Edwige or Karel and Marketa can be compared to the relationship of Tamina and her husband. In this way, although Tamina is the least active person in the story, she is the character from which the other stories ultimately revolve.

Through a range of characters, Kundera analyzes each of these themes and ties each group together by their common interaction between laughter, memories, forgetting, history, the past and social acceptance. In this way, Kundera acheives that which Beethoven and Kundera's father spent their last years working on—an understanding on the variation of a theme. In Kundera's case, he delves into the importance of laughter and the past through his characters actions, feelings and more.

More summaries and resources for teaching or studying The Book of Laughter and Forgetting.

The Book of Laughter and Forgetting from BookRags. (c)2022 BookRags, Inc. All rights reserved.