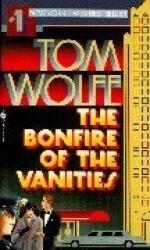 The Bonfire of the Vanities Summary & Study Guide

Tom Wolfe
This Study Guide consists of approximately 104 pages of chapter summaries, quotes, character analysis, themes, and more - everything you need to sharpen your knowledge of The Bonfire of the Vanities.

The Bonfire of the Vanities Summary & Study Guide Description

The Bonfire of the Vanities Summary & Study Guide includes comprehensive information and analysis to help you understand the book. This study guide contains the following sections:

This detailed literature summary also contains Related Titles and a Free Quiz on The Bonfire of the Vanities by Tom Wolfe.

The Bonfire of the Vanities is a sweeping saga set in 1980's New York, a decade that was popularly known as a greedy, materialistic era. Author Tom Wolfe's satirical treatment of this avarice ranges from the mean streets of Harlem to the privileged isolation of Park Avenue. Wolfe's darkly humorous drama invokes the tension of race and socio-economic relations in New York City during a decade when the haves and the have-nots were separated by a chasm too wide to be bridged. The novel's events center on a hit-and-run accident that takes place in a run-down area of the Bronx. Rich socialite, Sherman McCoy, and his mistress, Maria Ruskin, take a wrong turn on their way home from the airport one night and find themselves the victims of an apparent car-jacking attempt on a highway entrance ramp. They manage to escape, but wind up mowing down Henry Lamb, an African-American teenager, and one of two men involved in the carjacking.

Lamb makes it to the hospital, barely alive, and before he lapses into a fatal coma, he gives his mother the plate number and make of Sherman's flashy Mercedes, and tells her that the car was driven by a rich, white couple. Lamb makes no mention of the robbery attempt. Meanwhile, Sherman and Maria decide not to report the robbery attempt. Initially, Sherman wants to report the accident and seek medical treatment for the boy he thinks they hit, but Maria talks him out of it. She argues successfully that they had been in a fight for survival, and furthermore, since she was driving when they hit Henry Lamb, it is her decision to make. Sherman and Maria do not want their respective spouses to catch them in an affair, and Maria warns that they will lose their reputations and, quite possibly, their freedom, if they call the police. Thus, they end the evening making love in their rent-controlled love nest and congratulating each other for their narrow escape. Thus, Henry Lamb's life is sacrificed.

Reverend Bacon, a black activist from Harlem, is a personal friend of Lamb's mother, and he uses his influence to pressure the DA's office into discovering the identity of the rich, white driver. Eventually, the trail brings them to Sherman. He is a Wall Street bond trader during the height of the 1980's market bubble, in which vast fortunes were made and lost. Sherman is going broke on a salary of $3,000,000 a year. His acquisitiveness is typical of the 1980's Wall Street mind-set, when more was never enough, and any time not spent making money was a waste of time.

Underneath this Park Avenue fazade, Sherman hides many decent qualities. Most of the other characters are satirical caricatures of corrupt politicians, journalists, and social activists; thus, despite Sherman's flaws, the reader roots for him as he seeks to evade the jaws of justice. The Assistant District Attorney who prosecutes Sherman, Larry Kramer, manipulates the evidence to indict Sherman so that Kramer and his media-hungry boss, Abe Weiss, can look like darlings in the media. Reverend Bacon is a corrupt leader who plays up the racism angle in the press to win support for a lawsuit against the hospital that treated Lamb. When he learns Sherman's identity, Bacon makes it his goal to strip Sherman of his fortune through the courts. Bacon has reporter Peter Fallow of The City Light in his pocket, and he deploys the paper's tabloid-style yellow journalism to try the Sherman McCoy case in the media. As Bacon stirs up rage on the streets of Harlem, he warns that the final battle between the races is coming. The oppressed minorities, he promises, will rise up and fight for the lives of innocent young men like honor student Henry Lamb.

Caught in the middle of this high-profile, politically charged criminal case, Sherman is sacrificed to the mob. His money, marriage, job, mistress, and reputation are stripped away, and he is forced out of his safe, insulated Park Avenue world. Cast among the unwashed masses, people whom Sherman has always feared and looked down on, he gradually realizes that he is no better than anyone else. The man who once thought of himself as the Master of the Universe winds up leaving Park Avenue behind and rejoining the human race. Sherman and his tough Irish lawyer, Tommy Killian, win several legal battles, and Sherman rediscovers who he is. In the end, Sherman's youthful ideals begin to resurface. Nonetheless, the prosecution continues unabated. DA Weiss is re-elected by a landslide because of his popular stance against Sherman McCoy. The case remains unresolved at the end of the novel, but the author leaves Sherman on a hopeful note. Although Sherman's life is a shambles, his integrity is intact. Whatever happens to Sherman, it appears he will rebuild his life on a more meaningful foundation.

More summaries and resources for teaching or studying The Bonfire of the Vanities.

The Bonfire of the Vanities from BookRags. (c)2022 BookRags, Inc. All rights reserved.