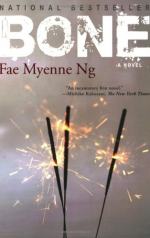 Leila is the main character and narrator of the story. She is the oldest of three daughters in a Chinese family. In her own mind, and even in the mind and beliefs of Mah, Leila is responsible for what happens in the family. Leila works at a school and has a long-term boyfriend, Mason, whom she ends up marrying. Leila’s biological father, Lyman Fu, left Mah when she was still pregnant with Leila, so she has never seen or spoken with her father in person. In reality, Leon is the only father Leila has ever known.

Ona is the middle daughter or second sister of Leila. Ona commits suicide by jumping off the 13th floor of an apartment building in Chinatown. Ona seems to be the daughter closest to Leon. Ona fell in love with Osvaldo, who was the son of one of Leon...