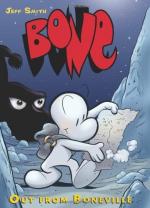 Jeff Smith (cartoonist)
This Study Guide consists of approximately 27 pages of chapter summaries, quotes, character analysis, themes, and more - everything you need to sharpen your knowledge of Bone.

Bone: Out from Boneville Summary & Study Guide includes comprehensive information and analysis to help you understand the book. This study guide contains the following sections:

This detailed literature summary also contains Topics for Discussion and a Free Quiz on Bone: Out from Boneville by Jeff Smith (cartoonist).

"Bone: Out From Boneville" by Jeff Smith is the first book in a series of nine that follows the comic adventures of three cousins after being driven from their hometown due to one of the character's infamous schemes to become rich. They are separated in the desert, and evil rat creatures plot to kill them and kidnap them. The Bones discover that it is only the help of new friends in the valley, and their love for another, that allow them to survive.

The Bones, those of Fone Bone, Phoney Bone, and Smiley Bone, are a trio of cousins originally from Boneville. They are human-like creatures, but are also blob like, in that they are all white with long noses and generally no clothing. These cousins find themselves run out of town due to a scam led by Phoney Bone, the richest Bone in Boneville, who is also crooked in his dealings. After wandering in the desert, the trio find themselves lost. When Smiley finds a map, they believe they are saved. However, a swarm of locusts soon separates the group, leaving each alone. Fone Bone finds a group of new friends including a bug named Ted and a family of possums in a nearby valley that help him to survive the winter. He also meets a young woman named Thorn who promises to help him find his home in the spring, and who takes him to live with her grandmother Ben, a tough old woman who races cows, literally. Fone is approached several times throughout the winter by a red dragon who seems to be following his every movement and protecting him, and is also chased by rat creatures, who, although stupid, seem to want to kill him.

Near spring, Fone and Phoney are reunited at Grandma Ben's house, and agree to travel to the Spring Fair. Phoney is angry at first, but when he hears there is betting on the cow races, he heads into town alone to begin to book money for the races. In town, he finds Smiley working at a local tavern and the two begin to make their plan for the race. The rat creatures, however, are beckoned by Kingdok, the head rat, who tells them to find Phoney, and to kill Fone and Smiley. Back on the farm, Thorn, Fone, and Grandma Ben are attacked by rat creatures. While Fone and Thorn run, Grandma stays behind to fight. Thorn and Fone are again saved by the dragon, who takes them back to Grandma Ben's, whom he appears to know. Grandma, Thorn, and Fone leave for town. Phoney, working at the bar to pay his tab, is approached by the cold, frightening hooded figure who called the meeting of the rats. He tells Phoney he owes his soul before disappearing. As Grandma enters town, the bar owner, Lucius, gives Grandma a flower, while the three Bones find themselves reunited. However, in the background, the hooded one waits in the shadows.

The animated story is vibrant with color, humor, and a sense of good verses evil that makes for a delightful adventure. The characters are easily loved, and when combined with a very expressively detailed art style, the book comes alive. A wonderful book for both adults and older children, "Bone: Out From Boneville" is the beginning of a journey that shows nothing but good can triumph in the presence of friends, and that the love of a family is stronger than anything.

More summaries and resources for teaching or studying Bone: Out from Boneville.

Bone: Out from Boneville from BookRags. (c)2022 BookRags, Inc. All rights reserved.