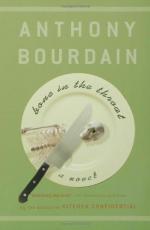 Anthony Bourdain
This Study Guide consists of approximately 38 pages of chapter summaries, quotes, character analysis, themes, and more - everything you need to sharpen your knowledge of Bone in the Throat.

Bone in the Throat Summary & Study Guide includes comprehensive information and analysis to help you understand the book. This study guide contains the following sections:

This detailed literature summary also contains Topics for Discussion and a Free Quiz on Bone in the Throat by Anthony Bourdain.

Bone in the Throat by Anthony Bourdain is the story of a mafia boss and an attempt to bring him and those who work for him to justice. Tommy Pagana is the nephew of Sally Wig, a murderer and extortionist. Tommy doesn't want anything to do with the crime world but gets pulled into the middle of Sally's "business". Tommy is busy trying to keep Sally's friends from killing him, due to what Tommy has seen, when Tommy is approached by the police with threats of prison if Tommy doesn't help them by ratting out his uncle.

Tommy Pagana is working in a restaurant called the Dreadnaught Grill as the assistant chef. Tommy's uncle, Sally Wig, tells Tommy to keep the restaurant open late one night so that Sally and a couple of guys can come by and talk some business. Tommy reluctantly agrees. When Sally arrives he shoots the man that came in with him and Sally and his friend Skinny, an assassin for the mob, quickly dispose of the body. Tommy is shaken and angry with his uncle for bringing him into the middle of this business.

Tommy's friend, referred to as the chef, goes out to get some drugs and is picked up by the police and asked a lot of questions by the police. Soon the head FBI agent, Al, goes to talk to Tommy and explains that they know that something happened with Sally and the man he brought to the restaurant that night. Tommy is worried about going to jail but knows that he can't say anything about what happened unless he wants to be killed too.

The man that owns the restaurant, Harvey, owes Sally a lot of money and is caught borrowing money from Sally's competitors. Sally takes over and soon finds out that Harvey is working with the FBI and has Harvey killed. Sally fires the chef and Tommy quits with him. Tommy is feeling the heat and knows that he is going to tell the FBI everything they want to know to get back at his uncle. Before Tommy has a chance to talk, Sally is murdered by Skinny because of the wire that the FBI had in Harvey's restaurant. What isn't known is that the FBI have Sally's place wired and Skinny is caught redhanded committing the murder of Sally Wig. Tommy and the chef are off the hook now from the police but Skinny is still worried that Tommy might say something about the death at the restaurant and put Skinny further in the hole. The head mob boss, Charlie Wagons, used to be friends with Tommy's parents and gives Tommy money to get him out of the country so that everyone will be happy.

More summaries and resources for teaching or studying Bone in the Throat.

Bone in the Throat from BookRags. (c)2022 BookRags, Inc. All rights reserved.