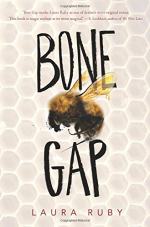 Related Topics
Thirteen Doorways, Wolves Behind Them All
Vampires Never Get Old: Tales with Fresh Bite

Laura Ruby
This Study Guide consists of approximately 44 pages of chapter summaries, quotes, character analysis, themes, and more - everything you need to sharpen your knowledge of Bone Gap.

Sean and Finn O'Sullivan are brothers who live in a small Midwestern town called Bone Gap. Their father is dead and their mother ran off to marry a man she met on the Internet so Sean has been working and caring for Finn ever since. People and things seem to disappear in Bone Gap into the real and magical gaps of the area. Finn is especially susceptible to the gaps, having always had a dreamy personality. Sean and Finn's lives are changed for the better when a beautiful girl named Roza shows up battered and bruised one day. She accepts the brothers' kindness and soon she and Sean fall in love. But one day Roza is abducted at a fair and Finn is the only witness, however he can't identify the man's face so there are no real clues to pursue and the people in town don't believe him. Everyone assumes that Roza wanted to leave because there are all kinds of gaps, real or imagined, through which people disappear. Finn begins dating Petey Willis, a beekeeper's daughter whom most people consider to be very homely. All the while, Finn has experiences of a horse that magically arrives in the barn and nature elements such as corn and crows which speak to him. Petey does some research and learns that Finn has a condition called face blindness and that is why he can't recall the kidnapper's face and Petey thinks it is also the reason he can fall in love with a homely girl like her. Knowing this, Finn determines to find Roza and his search takes him into a magical world of horror ruled by the kidnapper. Roza is only able to escape when she slashes her face with the jagged edge of a mirror and is no longer valuable to the evil man. Roza and Finn escape back to the world of Bone Gap and life can go on as before.

More summaries and resources for teaching or studying Bone Gap.