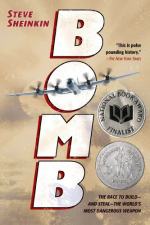 This detailed literature summary also contains Quotes and a Free Quiz on Bomb by Steve Sheinkin.

The “Bomb” is the story of the discovery of the atomic bomb during the 1940s. The wold was at war during the first half of this decade. Germany was trying to become a world leader and had attacked the surrounding countries, including Britain. The Soviets were allied with Britain while the Japanese were allied with Germany. The United States offered support to Britain but remained out of the fighting until the Japanese attacked Pearl Harbor, leaving thousands of Americans dead.

Meanwhile, a young German scientist had discovered atomic fission. He was confused by the results of his experiment and sought the advice of a colleague. She shared the information which eventually reached American scientists. They all realized that there was the potential for a huge bomb, bigger than the world has ever seen. Albert Einstein contacted President Franklin D. Roosevelt, urging him to consider getting American scientists to work on atomic research. Roosevelt heeded Einstein's advice and the first American atomic project was launched.

An American military man named Leslie Groves was in charge of the project and he chose Robert Oppenheimer to lead the scientific teams. Oppenheimer was a top scientist of the time and he accepted the challenge. He helped recruit the best scientists from America and Great Britain and work began in earnest. Eventually, they worked out the details and became convinced they could make a bomb. From their experiments and considering the science, they knew it would be a huge explosion but no one was really prepared for the reality. When the successful test was concluded, they were first pleased with the results, then horrified by the fact that their invention would change the course of history.

While the Americans and British were working on the bomb, the Soviet Union was trying to create a bomb of their own. The scientists there were struggling and making limited success. It became evident that their best hope of creating an atomic bomb would be to steal the American research. They recruited scientists working on the project who were willing to share information. With the help of these scientists, they eventually had a full set of plans for an atomic bomb. It was too little to help with the war effort, but the Soviets eventually did use the plans to create a bomb of their own.

The United States government was stunned when the Soviets created a bomb. They ramped up their efforts to decode encrypted messages from known Soviets who lived in the United States during the research period. When they finally broke the code, they came up with information from a top-secret document. The document was traced back to a British scientist named Klaus Fuchs. He soon gave up every piece of information he had, including the names of others involved. One of those was Harry Gold.

Gold was an American who had a great deal of information about the Soviet spies of the day. Fuchs didn't face the death penalty because Britain and the Soviet Union were allies during World War II. Gold wasn't as fortunate. He cooperated with the FBI's investigation and was spared the death penalty. A third person accused of handing off sensitive secrets was Ted Hall. The government was never able to make a case against him and he was never charged.

At the end of the war, the American government pushed for development of more bombs and of more powerful bombs. Oppenheimer objected, saying it wouldn't make America safer if every country built bigger bombs.