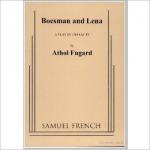 Hello and Goodbye, a play by Athol Fugard written in 1965, is a drama that explores the lives and conflicts of a white brother and sister also living in Port Elizabeth, South Africa.

Writing South Africa: Literature, Apartheid, and Democracy, 1970-95 is a book published in 1998 and edited by Derek Attrige and Rosemary Jolly. Exploring how apartheid is portrayed in various forms of literature, the book includes original writings on the subject.

Lifetimes under Apartheid is a book published in 1986 which contains both non-fiction and fiction writing as well as photographs by Nadine Gordimer and David Goldblatt. The book explores how people lived under the restrictions of apartheid.

The Smell of Apples, a novel by Mark Behr published in 1995, explores life under apartheid in South Africa, highlighting events of 1961.