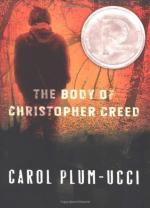 The Body of Christopher Creed Summary & Study Guide includes comprehensive information and analysis to help you understand the book. This study guide contains the following sections:

This detailed literature summary also contains Topics for Discussion on The Body of Christopher Creed by Carol Plum-Ucci.

Victor “Torey” Adams has been dragged into helping with a prank on the weird kid in the dorm at his high school. The prank more-or-less harmlessly backfires, but Leo, the strange kid, comes out to talk with Torey. Torey is uncomfortable with Leo, but he tries to get over it and be considerate—not entirely successfully.

Torey is worried that Leo has gotten into Torey’s computer and looked at his personal document—specifically, a document about the disappearance of one of the kids from Torey’s previous high school in the town of Steepleton. The kid who disappeared was a social misfit named Chris Creed, and Torey’s document explaining the circumstances of his disappearance is called Creed.doc. He has sent the document to dozens of people through email. With the beginning of Chapter 2, Torey re-reads his own document, telling the reader the story of events from the year before.

Having arrived at church late, Torey, his best friend Alex, and a couple other friends sit in front, where Torey can see the stained-glass image of Christ on the wall—an image that disturbs him because it’s at odds with the story portrayed in the Bible, where Christ is crucified naked. As he’s thinking, Mrs. Creed gets up and asks the congregation to help look for her son, who has disappeared a few days earlier. The rumors say he committed suicide. Or ran away. Or was murdered.

One way or another, Chris left because he was troubled. Torey reflects back on his own interactions with Chris, including when Torey sent him to the hospital with a gushing bloody nose in sixth grade. Just about everyone Torey knows has beaten Chris up at one time or another, because he was so cluelessly irritating. But Torey feels partially responsible for Chris’s unhappiness, so he and his friends get a copy of Creed’s note. That disturbs Torey even more, because Chris specifically wishes he had been born as someone else, someone like...Torey Adams.

Ali McDermott, a classmate of Torey’s who has a kind of shady reputation, lives right across the street from Chris Creed’s house. She’s seen Mrs. Creed doing some strange stuff, and she invites Torey to visit the next day after school so he can see, too.

The next afternoon, Torey is at Ali’s when Ali’s “secret” boyfriend arrives. He’s the troublemaker Bo Richardson, a big, scary looking kid from the wrong side of the tracks. They watch Mrs. Creed search through Chris’s room, looking for his diary. Ali knows it’s behind a picture on Chris’s wall, and they determine they need to get it before Mrs. Creed does.

Torey calls the Creeds and makes up a story to get them out of the house while Bo sneaks over there to get the diary after they leave. Instead, Bo, Ali, and Torey end up in the police station—Bo under suspicion, and Ali and Torey for questioning. Torey’s mother heads off the trouble, but Bo must remain in jail overnight. But Chris’s brother had snuck the diary out to Bo, and he snuck it to Ali.

Chris’s diary tells of such things as his interactions with his girlfriend, a beautiful naïve blonde woman. They read the diary and track down the young woman. She ends up being attractive enough, but she is by no means naïve. Although she did hang out with Chris—even having sex once—she didn’t consider herself his girlfriend. In fact, most of the scenes in Chris’s diary simply didn’t happen.

Torey is haunted by the thought that Chris Creed’s dead body might be in the Lenape burial ground behind Torey’s house. He and Ali search, but don’t find a body. Then Alex, Torey’s best friend, tells Torey people think Torey and Bo killed Chris Creed. Torey heads to the burial ground again, alone, in the dark, with a single flashlight.

He rolls a rock aside, crushing his leg and exposing a cave with several ancient Lenape bodies within. There is also a more recent body, face hidden by crusted blood. But even as Torey watches, the body burns up, leaving ashy bones behind.

That’s the end of the Creed.doc file, and Torey’s narrative returns to the present. The body wasn’t Creed, but a man from Steepleton who’d committed suicide some years ago, and the body decomposed instantly when the oxygen was let in.

That experience, along with the rumors that still float around—rumors claiming Torey killed Chris and hid the body—push Torey out of Steepleton. He goes to complete his final year of high school at Rothborne, a boarding school. He is convinced Chris is alive, and Torey has been emailing the Creed.doc to people with names he suspects might be Chris’s alias in his new life.

The book closes with several responses Torey has received to his email—some skeptical, some supportive, some annoying. The fate of Christopher Creed remains a mystery.