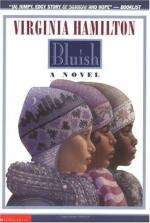 Virginia Hamilton
This Study Guide consists of approximately 27 pages of chapter summaries, quotes, character analysis, themes, and more - everything you need to sharpen your knowledge of Bluish.

This detailed literature summary also contains Topics for Discussion and a Free Quiz on Bluish by Virginia Hamilton.

Set in modern-day New York City, Bluish is a novel about a budding friendship between three preteen girls, one of whom is afflicted with a form of blood cancer.

Dreenie is the primary character of the novel. She is made anxious and curious when a new girl is introduced into her fifth-grade class. The girl is confined to a wheelchair, and she is so pale that the blue veins underneath the skin can be seen, giving her a bluish hue. Dreenie and the other children give her the nickname, Bluish. Bluish is made an outsider by her condition, and she frequently has to leave early for doctor's appointments. Dreenie herself is also an outsider, as a new kid in school who is being outshined by her intellectually-gifted younger sister, Willie. Dreenie's sole friend at school is the extroverted and flamboyant Tuli, who speaks with a Hispanic accent and mangles Spanish words in order to impress others and make them laugh.

One day in class, a boy tries to snatch the knit cap from Bluish's head. She becomes so upset that she vomits, and this causes disgust and shock in the students. While other students ridicule Bluish or stay away from her entirely, scared of catching her disease, the more mature Dreenie tries to understand Bluish. She explains her anxiety about Bluish to her mother and father, who teach her to respect Bluish and treat her like Dreenie herself would want to be treated. Dreenie also volunteers to help push Bluish's wheelchair when Bluish needs to exit the building for the doctor, initiating a connection. For her part, Bluish attempts to force the students to confront their fears and treat Bluish like a human being, as when she parks her wheelchair right in front of the classroom door so that students must get very close to her to exit.

Dreenie, Bluish, Tuli, and another girl are put into a group for a school project involving highlighting some aspect of New York City. A friendship blossoms, and Bluish gives the girls caps she personally knit. Bluish later gives hats to all the students in class, who are very grateful and who embrace Bluish as one of their own. Later, Dreenie plans a surprise for Bluish in which the class simultaneously rises and puts on the caps Bluish gifted them, which delights Bluish.

One day, responding to anxiety among the students, the teacher decides to explain the nature of Bluish condition: she has blood cancer and is undergoing chemotherapy. The students understand Bluish more and are more at ease.

Prior to winter vacation, the class goes on a field trip to the history museum, and Bluish is amazed when a large blue butterfly lands on her arm while inside the butterfly sanctuary. For Christmas, Dreenie gets Bluish a model of that same butterfly to hang in her room, the notion being that Bluish is also a beautiful and fragile thing.

By the New Year, Bluish, Tuli, and Dreenie are very good friends, and they make a pact to always look out for each other.

More summaries and resources for teaching or studying Bluish.