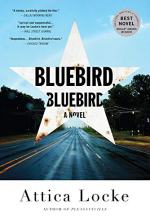 Attica Locke
This Study Guide consists of approximately 49 pages of chapter summaries, quotes, character analysis, themes, and more - everything you need to sharpen your knowledge of Bluebird, Bluebird.

The following version of this book was used to create the guide: Locke, Attica. Bluebird, Bluebird. Mulholland Books, 2018.

The novel is divided in to a prologue, 27 chapters, and an epilogue. Most of the chapters center on Darren Mathews as he investigates the murders of two people, a black man and a white woman, in Lark, Texas.

The novel begins with the prologue, titled “Shelby County,” as Geneva Sweet visits the graves of her husband and her son, both named Joe. After a brief visit, she returns to her store in Lark, called Geneva Sweet’s Sweets, where some of the other townsfolk inform her that the local sheriff has arrived to investigate the presence of a body in the bayou behind Geneva’s café. They also lament that a black man named Michael Wright had been killed as well, but little was being done about it.

The story then shifts to the perspective of Darren Mathews, a black Texas Ranger currently giving testimony in a grand jury hearing. Darren had been called by his friend Mack one night, asking him to come to his house as there was a white supremacist named Ronnie Malvo there threatening his granddaughter. Darren arrived and the situation defused, but Malvo was found dead not long after, shot with the same gun Mack had the night of the confrontation. Darren leaves the hearing, worried that his friend Mack will be indicted and have to go to trial. Soon, Darren receives a call from his friend Greg, who works for the Houston branch of the FBI. Although Darren is currently suspended as a Ranger due to his involvement with Mack and Malvo, Greg informs him of two murders in a town called Lark in East Texas. Intrigued by a possible racial motive, Darren decides to drive to Lark to investigate.

Upon arriving, he goes to Geneva’s store without his badge and sees Missy’s body behind the restaurant. He also meets Wally, a powerful white man in town who lives just across the highway from Geneva. Darren then goes to the local bar, owned by Wally and patronized entirely by white people, some with Aryan Brotherhood tattoos. There he meets the only other black person inside, Michael’s widow Randie. The two leave the bar after an altercation and go to a nearby hotel. After putting Randie to bed, Darren goes to the bayou behind the icehouse to investigate and finds the water is not nearly deep enough to drown in, as the preliminary report of Michael’s death suggested.

The next morning, Darren receives a phone call from his lieutenant, who begrudgingly restores him to duty and asks him to continue the investigation. Darren and Randie go to meet the sheriff, who has set up a temporary office in Wally’s home, and Darren meets resistance to his efforts from both Wally and the sheriff. They then go to Geneva’s across the street and Randie notes a guitar hanging on the wall that once belonged to Michael. They learn Michael was at the icehouse the night he was murdered.

Darren goes to the icehouse and waits around the back until the bartender, Lynn, comes out. She reveals that Missy had been working as a waitress the night she and Michael were both killed, and that they left together after talking for a long time. Brady, a member of the Aryan Brotherhood, and Keith, Missy’s husband, then come out and attempt to kill Darren, but he escapes with Randie.

The two drive to a nearby bar, where Randie reveals that Michael’s uncle and Joe Sweet used to play blues music together. When they were on tour decades ago, they stopped in Lark and Joe fell in love with Geneva, abandoning the tour to stay behind. Michael’s uncle kept Joe’s guitar until his death, when Michael decided to return it to Geneva, explaining his presence in Lark in the first place. After the bar, they return to Geneva’s, and soon a truck drives by and shoots a hole in the door of the restaurant. Darren and Randie pass the night there, and learn that Geneva’s son, Joe Jr., was killed by his wife for having an affair with Missy some three years ago.

Darren surmises that Keith and Missy’s son is actually Missy and Joe Jr.’s son, and learns that Geneva and Wally’s father once had an affair that produced Joe Jr., making Keith’s son Wally’s nephew and Geneva’s grandson. The sheriff arrives and arrests Geneva in connection with Missy’s murder, as she was the last one to see her alive. Darren goes to the station and learns that Missy was strangled to death. He goes to the lumber mill where Keith works and Keith assaults him, so Darren arrests him and interrogates him. Keith confesses to killing Missy and beating Michael nearly to death for trying to sleep with his wife, but professes that he did not kill him. Darren soon returns to Geneva’s and learns that Joe Sr. allegedly died from a gunshot during a robbery six years ago, and the perpetrators were never caught.

The next day, Darren learns that Keith has been charged with both murders and that he is to be present during a press conference. Darren, unconvinced that Keith actually killed Michael, continues investigating and soon grows suspicious of Wally’s motivations. He goes to investigate Wally’s house further, and upon entering a barn in the back yard sees tire tracks leading away. He then finds Isaac, a simple-minded barber who was the only witness during Joe Sr.’s death, hiding. Isaac takes two shots at Darren and runs, but it soon apprehended and arrested. Isaac confesses that he killed Michael under Wally’s orders, and that he was working for Wally because Wally had blackmailed him into keeping quiet about the night of Joe Sr.’s death. Isaac reveals that Wally was the one who killed Joe Sr. in a fit of jealousy over Geneva.

Now content that the truth had been discovered, Darren returned to his home in San Jacinto County where his uncle was throwing a party to celebrate the success of the case and Mack’s exoneration by the grand jury. During the party, however, Darren’s estranged mother, Bell Callis, shows up and reveals to Darren that she found the missing gun used in Malvo’s death, and that it was a .38 just like Mack had. As the novel ends, Darren realizes that his mother now controls his future with the Rangers, as she has a piece of evidence that could ruin him.

More summaries and resources for teaching or studying Bluebird, Bluebird.