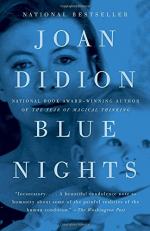 Joan Didion
This Study Guide consists of approximately 38 pages of chapter summaries, quotes, character analysis, themes, and more - everything you need to sharpen your knowledge of Blue Nights.

Joan Didion writes that she chose the title “Blue Nights” since this book is about “the dying of the brightness” (4). She remembers her daughter Quintana’s wedding day and foreshadows that her husband will die later that year and her daughter will also pass away only twenty months after her wedding. Joan also remembers the untimely death of family friend Natasha Richardson and reflects on how “this was never supposed to happen to [them]” (16). The phrase reflects the feeling that tragedy should not come to young people, or to one’s own children. She remembers moments from Quintana’s childhood and sees her house as full of memories that only remind her of what she has lost. Joan also remembers Quintana’s childhood anxieties, depression, and fear of abandonment.

As Joan writes more and more about parents and children, she realizes that the true subject of her book is not just about children. It is actually about the universal “failure to confront the certainties of aging, illness, death” (54).

Next, Joan flashes back to the mid-1960s when she and her husband adopted Quintana. She writes about the complications of how to handle adoption and the abandonment issues that often come with it. Joan confesses that her approach to motherhood may have been initially naïve but that she now knows adoption is “hard to get right” (60). She recognizes that Quintana’s fear of being abandoned by her parents mirrored her own fear of losing her daughter. This prompts her to think about some of the other loses in her life such as the death of her friends.

Joan’s memories of Quintana are of a bright and creative child who took on unnecessary adult responsibilities. In the present, Joan wonders how she and her husband might have influenced this tendency or expected too much of their daughter. She questions how one can measure the success of parenthood and reflects on different parenting style through the generations.

Next, Joan writes about the realities and challenges of aging that she is now forced to face. She feels frailer than ever before and fears both cognitive and physical incapacitation. She perseveres with physical therapy and asks herself over and over again what she is really, truly afraid of when she feels old and frail.

Joan then returns to the topic of adoption and writes about the challenges that came when Quintana connected with her biological family. Joan acknowledges that most adopted children fear abandonment and that adoption brings with it many complex and muddled instincts on all sides.

Returning again to the topic of aging, Joan reflects on how her youth seems to have been only yesterday. She struggles to come to terms with the realities of aging and has to accept that certain seasons of her life are fully over now that she is seventy-five. Not long after, Joan suffers a serious fall and a period of hospitalization. Back at home, she remembers Quintana’s desire not to dwell on death. She flashes back to the memories of her daughter’s funeral and notes that there is only one space left in the chapel where the rest of her family’s remains are at rest. She also recounts the day of her daughter’s death and the grief she felt, not just for the loss of Quintana, but for the loss of so many of her friends, her youth, and her past life.

To deal with her grief, Joan decides to maintain momentum by focusing on her work. This helps, but it also causes her to overexert herself and prompts further illness. At the same time, she maintains a sense of hope. She draws strength from an image of Sophia Loren, a fellow survivor from the 1960s and feels a renewed sense of hope when she realizes they are the same age.

Joan struggles again with who to designate as her emergency contact person, feeling that it should be her daughter. She still sees Quintana every day, but cannot reach her. Joan finally realizes that her fear is no longer for what is lost, but for what is still to be lost.

More summaries and resources for teaching or studying Blue Nights.