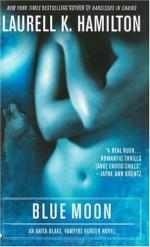 This detailed literature summary also contains Topics for Discussion and a Free Quiz on Blue Moon by Laurell K. Hamilton.

Anita Blake is a jaded vampire executioner and necromancer. The irony is obvious as she is dating a vampire, Jean Claude, the master vampire of St. Louis. Anita is one corner of a triumvirate between herself, Jean Claude, and her former fiancée Richard, who also happens to be a werewolf. Anita is called to Tennessee to help Richard who has been jailed on rape charges. Anita and a gang of vampires and lycanthropes descend on Myerton Tennessee, intent on freeing Richard and taking him home. The master vampire of the area and a wealthy collector have other ideas, leaving Anita to use her wits to save them all.

Anita Blake is summoned to Tennessee to save the life of her former love, Richard Zeeman. Richard has been arrested on rape charges, something that Anita sees as impossible as Richard has the personality of a boy scout. Though Anita's current lover, Jean-Claude is not happy to see her go, the vampire knows that if anything were to happen to Richard, it would be dangerous for Anita as well as himself. The three are members of a triumvirate, a triangle of power, created by the vampire when he bestowed three of the four vampire marks on Anita and Richard.

In Tennessee, Anita works with the local pack to defeat the Master Vampire in the area, Colin, as well as fight an internal battle with the spirit of Raina, the former lupa of Richard's pack. Anita also must learn to function as the leader of the were-leopards and take care of her own. Anita struggles to keep everyone safe as they fight to keep the local troll pack safe from Franklin Niley, an evil man who frames the trolls for two killings, hoping they will be hunted and he can have access to their land to hunt for an artifact he believes is located there. Niley hires a sorcerer to summon a demon, kidnapping Richard's mother and brother, threatening their lives if Anita and Richard do not leave the area. Anita is able to defeat Niley's demon through her own faith, which in turn gives her the inner faith to control the munin of Raina.

Anita puts her relationships with Jean-Claude and Richard on hold, choosing to focus on herself and work with Marianne, a wise woman, to learn to control the magic that Blake possesses.