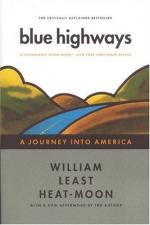 William Least Heat-Moon
This Study Guide consists of approximately 32 pages of chapter summaries, quotes, character analysis, themes, and more - everything you need to sharpen your knowledge of Blue Highways.

This detailed literature summary also contains Topics for Discussion and a Free Quiz on Blue Highways: A Journey Into America by William Least Heat-Moon.

Blue Highways: A Journey into America is William Least Heat Moon's account of a three-month, 13,000-mile trip around the United States. William sets out in his van to follow back roads of America, "blue highways" because they are colored blue on road maps. Throughout his trip William encounters diverse people, explores natural wonders and finds out more about himself in the process.

William Least Heat Moon, whose given English name is William Trogdon, reaches a crisis point in his life when he loses his college teaching job and learns that his estranged wife is dating another man. Debating about what to do and what direction his life should take in light of these two events, William quietly decides to take a journey around the United States in hopes of discovering not only a little bit about his country but also about himself. William outfits his Ford van, which he calls Ghost Dancing, and set out on his journey from his Columbia, Missouri, home in March of 1978.

Headed east, William visits Kentucky, Tennessee, North Carolina and South Carolina before turning southward into Georgia for a quick tour of the Southeast. During this initial leg of the journey William is excited to see new people and learn about their lives. He lingers on back roads looking for obscurely-named towns just for the amusement. As William's trip takes him in a southwesterly direction he learns from people in Georgia and Alabama that the Civil Rights movement of ten years before has not dramatically changed the lives of the black people living in those states.

Throughout Louisiana and Texas, William meets people who live and play hard and enjoys listening to stories about their lives. For the first time on his trip, William begins to feel a sense of loneliness and wonders if he should return home, but he perseveres hoping that something new will reveal itself and hopefully take the edge off his personal pain. William connects with his Native American heritage throughout the trip through the western states and does not find the vastness of the territory comforting in spite of his ancestral connections.

The Northwest does little to ease William's angst due to driving in unrelenting rain, but William acknowledges the beauty of the land and the history of the Lewis and Clark expedition whose path he follows at some points. William is all too happy to reach Michigan, cross into Canada briefly and then into New England before heading into New York where he visits an old friend. Fueled by the contact with his friend, William continues his trip southward into New Jersey, Delaware, Maryland, and West Virginia. Ultimately, William crosses the Ohio River, drives past the cornfields of Indiana and heads home with knowledge of people and places he has seen and a little more knowledge of himself.

More summaries and resources for teaching or studying Blue Highways: A Journey Into America.