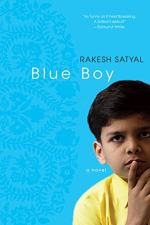 Satyal, Rakesh
This Study Guide consists of approximately 57 pages of chapter summaries, quotes, character analysis, themes, and more - everything you need to sharpen your knowledge of Blue Boy.

The following version of this book was used to create this study guide: Satyal, Rakesh. Blue Boy. Kensington Books, 2009. First Kensington Trade Paperback Printing: May 2009. The story is told from the first person, present-tense point of view of its protagonist, Kiran, a pre-adolescent South Asian boy. The term “Indian” is used in this analysis as Kiran (and the author) use it – that is, to refer to individuals or an experiences having their origins in India.

The novel opens with a prologue, in which Kiran’s mother discovers him experimenting with her make-up. Having been inspired by both the beauty of his blue-hued skin (tinted with his mother’s eye shadow) and by a glimpse of the Hindu god Krishna on the family altar, Kiran starts to wonder whether he might, in fact, be the legendary tenth incarnation of the god.

Kiran then begins a quest to become as Krishna-like as possible. One of his goals is to do spectacularly well at an upcoming school talent show, so much of his time is devoted to sketching costumes and considering just what form his performance will take, with an eye towards making it as Krishna-like as possible. Meanwhile, he struggles to cope with experiences of being bullied, by both the non-Indian (white) kids at school and the Indian kids within the community of Hindus to which he and his family belong.

Among Kiran’s few friends is Cody who, because of a physical birth defect, is as much of an outsider at school as Kiran is. One day, when Kiran is visiting, Cody shows him his pornography collection, leading Kiran to become increasingly obsessed with sex – stealing pornographic magazines of his own, taking note of when people in his circle of youthful Indian friends are engaging in sex and, after seeing three teenagers having sex in a public park, trying as hard as possible to see something similar again. This is all part of his plan to be as Krishna-like as possible: Krishna, he has learned, was a great lover.

Meanwhile, life at home becomes increasingly difficult, as Kiran’s parents become increasingly distressed at how un-boy-like his behavior is. Eventually, Kiran’s volatile father takes him on a drive to the same park where he saw the three teenagers have sex, and tells him to stop doing things that make his parents both tired and worried about him.

As Kiran’s preparations for the talent show intensify alongside his determination to become more Krishna-like, the bullying he experiences both at school and in his Indian community also intensifies. One night, on a clandestine trip to the school art classroom to steal some supplies for his costume, he notices four of the people who bully him at school (now including Cody) smoking outside. He becomes so angry that he throws a pile of artwork into the classroom’s kiln and runs off. The next day, he is gratified to learn that Cody and the others have been held responsible for the resulting fire.

As the night of the talent show draws nearer, Kiran starts to notice that his skin is starting to take on a bluish tinge, and comes to believe that he is becoming more Krishna-like. On the night of the talent show, he falls painfully ill with one of the migraines he frequently has, but performs anyway, dancing himself into a transcendent ecstasy that, combined with the migraine, leads him into an onstage faint. When he wakes up in the hospital, he is surprised to learn that there is an explanation for his bluish skin: one of the mineral supplements his mother has been giving him contains silver, which has a side effect of turning the skin of people who consume large amounts of it quite blue.

Back at home, Kiran is tenderly taken care of by his parents. Shortly afterwards, he is invited to participate in the music making at the Hindu temple where he and his family worship. He plays the finger cymbals happily and well, celebrating the new, freer version of himself he has become.

More summaries and resources for teaching or studying Blue Boy.