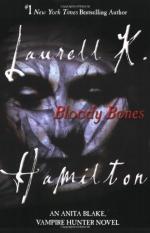 This detailed literature summary also contains Topics for Discussion and a Free Quiz on Bloody Bones by Laurell K. Hamilton.

Bloody Bones by Laurell K. Hamilton is a novel centering on the life of Anita Blake, animator of the dead and vampire executioner. Blake is called to raise a cemetery of dead in order to prove ownership of the land where they rest. Anita becomes involved in a battle for power with the local Master Vampire, fairies, and various creatures of the night for her life and the life of a young local boy.

Anita Blake is called by her boss to raise a cemetery of dead for a developer near Branson, Missouri. Blake takes the job, seeing it as a challenge and an opportunity to train her apprentice, Larry Kirkland. The two head to Branson for what Anita thinks will be a difficult job, but nothing else. Arriving, Blake discovers that the developer, Raymond Stirling is willing to pay Anita to lie about the dead, telling her that his entire fortune is invested in the land and that if it belongs to the Bouvier family he will have lost everything. Anita tells the man she will not lie for him.

Receiving a call from St. Louis, Anita is told of a possible vampire kill in the area. As a member of the Regional Preternatual Investigation Team, or Ripit, Anita heads to the area with Larry. Upon arriving, Anita finds an uncooperative Sergeant Freemont and three dismembered boys. Anita is not sure what killed the young men, and the sergeant is less than willing to cooperate. Anita does discover that there may already have been a similar murder, and Freemont agrees reluctantly to allow her to examine the crime scene photos. Anita receives another call; another vampire victim is in the area. Arriving at the home of the Quinlan family, Anita discovers that their daughter Ellie has been drained and killed by a vampire she invited in. Discussing this with the family, Anita finds out that Ellie's boyfriend has disappeared recently. This young man is most likely the vampire that she welcomed. It seems to Anita that Ellie intended to be a vampire as well, but her parents want her staked before she can rise again

Anita works with the local law enforcement to hunt the vampire that killed Ellie, and the group is surprised in the woods by a group of vampires instead. It turns out that the battle is a distraction; others are at the Quinlan house retrieving Ellie's body and kidnapping young Jeff Quinlan. Anita is forced to call on her "boyfriend," Jean Claude, the Master of the City of St. Louis, to negotiate the release of Jeff Quinlan with the Master of Branson. Jean Claude comes to help Anita, believing he will be able to negotiate with Serephina, the local master.

Anita and Jean Claude are stunned to find that Serephina is much more powerful than Jean Claude had known her to be. One of the reasons might be that she has been drinking the blood of Magnus Bouvier, the man who has been battling Raymond Stirling for the land on the mountaintop. Bouvier is a fairie and holds captive in the hills the creature known as Rawhead and Bloody Bones. Bloody Bones had been captured after a relative of Magnus's had used the creature to gain power, and now the Bouvier family must keep the creature imprisoned as penance. Magnus, however had been drinking the blood of the creature to gain power. Serephina had been drinking Magnus's blood in turn, striving for immortality.

A battle of strength and wills takes place, with Anita unwilling to give up the fight for the life of Jeff Quinlan. Serephina is able to penetrate Anita's dreams, revealing a deep connection between the two of them. Using Anita's dead mother as a type of bait, Serephina is able to challenge Anita in a way that no one else has before. Raising the dead for Stirling on the mountaintop turns out to be part of Serephina's plan as well. The power that Anita possesses has been abused to break Rawhead and Bloody Bones from its prison. Stirling had been used by Serephina as well. Once the vampire's goal is completed, there is no further use for Stirling, and Serephina's minions use the developer as food.

The battle between good and evil comes to a climax when Anita is forced to face down Serephina and Rawhead and Bloody Bones. The vampire wishes to be immortal and believes drinking the blood of the creature will make her so. When Bloody Bones discovers her deception she is almost killed, but Anita kills the creature instead, realizing that Bloody Bones is responsible for the gruesome deaths in the area. Angered, Serephina takes Anita instead, using her friend Larry as a bargaining tool. Anita is forced to give herself to the vampire to save her friend's life. Serephina will have Anita's blood. As a necromancer, or person who can raise the dead, Anita's blood is powerful as well.

Able to break free of Serephina for a short time, Anita alerts the authorities to her location. Rather than killing the vampire easily, Anita is forced to struggle and fight her own desire to save Serephina. Having been bitten by Serephina, Anita carries Serephina's mark, and Serephina is able to call to Anita and invade her thoughts. Through a mighty internal struggle and with the help of those around her, Anita is able to stop herself from saving the vampire. Jeff Quinlan is lost to the vampires, but all the others are dead or dispersed.

Anita is left to struggle within herself. Second thoughts of how she could have done things differently preventing so much loss of life overwhelm her at times. Blake also is still involved with two men, a werewolf and the vampire, Jean Claude. This struggle seems to be harder than it had been. By dealing with Serephina, Anita realizes that things are not black and white. Shades of grey cloud the issue. Where she had thought Jean Claude a monster because he is a vampire, Anita is forced to take a second look. Jean Claude had proven himself a good man, though a dead one, in the battle with Serephina, and Anita can no longer classify him as simply a monster.