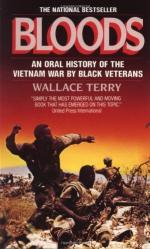 Wallace Terry
This Study Guide consists of approximately 43 pages of chapter summaries, quotes, character analysis, themes, and more - everything you need to sharpen your knowledge of Bloods.

Bloods: An Oral History of the Vietnam War by Black Veterans Summary & Study Guide includes comprehensive information and analysis to help you understand the book. This study guide contains the following sections:

This detailed literature summary also contains Topics for Discussion and a Free Quiz on Bloods: An Oral History of the Vietnam War by Black Veterans by Wallace Terry.

In Bloods, Wallace Terry has compiled the stories of twenty black Vietnam veterans. The stories range in experience from the gruesome to the heart wrenching to the idealized Vietnam of Hollywood. Terry does not interject his voice into any of the stories so that the reader often feels as if they are having coffee with the person relating the story. The language of the soldiers varies from illiterate to well educated and Terry makes no attempt to polish the veterans' words. The book is open, honest, raw, and truthful in its depiction of Vietnam, civil rights, and war in general.

While there is no apparent order to the stories, the reader still gets a sense of cohesiveness. Wallace Terry introduces Reginald "Malik" Edwards first. Malik's experience could be considered a typical war story. He is young, scared and confused. Although he has been trained to kill, the first time he shoots an enemy soldier at close range Malik is shaken and feels guilty. The racism that Malik experiences in the military fuels his anger until he becomes a leading member of the Black Panthers. Malik never gets away from Vietnam or the evil that he witnessed there.

Some of the soldiers have intense religious experiences while in Vietnam. Shortly before an attack on his bunker sends Luther Benton into the sky from a rocket blast, he receives orders from God to preach to the people. Luther does not immediately realize that he is saved from the rocket blast in order to fulfill God's command. Instead his whole personality changes from laid back to ready to kill. Luther does not follow God's call until he is back in the States and removed from the pressures of Vietnam. Other soldiers lose their faith after what they witness in Vietnam. Many of the soldiers report that their lives before the war are greatly affected after their tours. The men are so affected by what they are forced to take part in that they cannot help but be different men. Most of the men state that they feel betrayed by their country. They gave the best part of themselves to serve the United States only to be forgotten about or treated disrespectfully when they return home. Edgar Huff serves in the military for thirty years only to be the target of racism following his retirement. Some soldiers report no difference between the treatment of whites and blacks in the war. The consensus appears to be that those in the field were too concerned with staying alive to segregate themselves, while those in the back had more free time to fight white soldiers.

The last two stories in the book create the biggest contrast with each other and in comparison to the rest of the experiences presented. Dwyte Brown is one of the few men who can say they enjoyed their war experience. Fred Cherry has perhaps the worst war experience imaginable. Up until these final chapters most of the stories have had common themes and outcomes. Dwyte and Fred provide evidence that often it is the individual who structures his experience no matter what the environment. Dwyte and Fred have vastly different experiences in Vietnam but both walk away with similar feelings toward the war and Vietnam. The entire book presents an interesting study on war, individuals, and race relations.

Bloods: An Oral History of the Vietnam War by Black Veterans from BookRags. (c)2022 BookRags, Inc. All rights reserved.