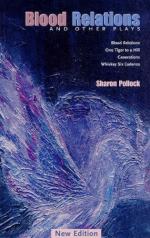 Sharon Pollock
This Study Guide consists of approximately 40 pages of chapter summaries, quotes, character analysis, themes, and more - everything you need to sharpen your knowledge of Blood Relations.

Trifles is a play by Susan Glaspell, written in 1916, with some interesting parallels to Pollock's work. It's the story of a farm woman arrested for murdering her husband. When looking for clues to prove her guilt, investigators find a canary dead of a broken neck.

Eugene O'Neill's Desire under the Elms is a look at an explosive family situation, also involving a farm and which relative will inherit the land. Like Blood Relations, the play involves a stepmother and a violent act that tears the family apart.

Another Sharon Pollock work, Saucy Jack, deals with a historical murder case. First produced in 1993, this play explores the story of Jack the Ripper.

The Angel of Darkness (1997) by Caleb Carr deals with a forensic psychologist tracking a murderous governess. The novel deals with common nineteenth century perceptions of female roles and the...

More summaries and resources for teaching or studying Blood Relations.

Blood Relations from Gale. ©2005-2006 Thomson Gale, a part of the Thomson Corporation. All rights reserved.