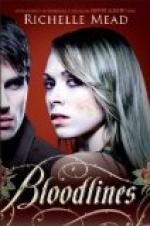 Richelle Mead
This Study Guide consists of approximately 28 pages of chapter summaries, quotes, character analysis, themes, and more - everything you need to sharpen your knowledge of Bloodlines.

Bloodlines is the first novel in the international bestselling series of novels by Richelle Mead. In this novel, the main character and narrator, Sydney Sage describes the worlds that exist between humans, vampires, and Alchemists. Alchemists, which is the race that Sydney belongs to, are responsible for protecting humans from vampires. When one vampire race, the Morois, have rogue Morois attack their new Moroi Queen, Vasilia Dragomir, and her sister Jillian Dragomir, the Moroi decide it is best to send Jill away until the revolution settles down. The Moroi law states that a queen can only become queen if she has a sibling, so if the rogue Morois are able to kill off Jill, then they can also remove Vasilisa as queen.

The mission requires three groups to come together in order to pull it off. They consist of the Moroi, the dhamphirs, and the Alchemists. The main character and narrator is an Alchemist, Sydney Sage. Sydney's job in the mission is to act as Jill's older sister and roommate at a private boarding school in Palm Springs, California. The job of an Alchemist is to clean up vampire actions to hide and protect the human race from the vampire race.

Another member of the team is Eddie, who is a dhamphir. Eddie's job is to protect Jill, while acting as her brother. Eddie is a student at the private boarding school, Amberwood Prep. Keith, who is also an Alchemist, acts as the older brother and local guardian of Sydney, Jill, and Eddie.

As the group lives out their time in Palm Springs while the Moroi are trying to change the law, which will prevent the rogue Moroi from trying to kill Jill, several mysterious happens occur. For one, the recluse Moroi, Clarence, that is providing the feeder for Jill, is convinced that vampire hunters are responsible for killing his niece Tamara. When another Moroi girl turns up dead in the same manner that Tamara died, this further convinces Clarence of the existence of vampire hunters.

In addition, Sydney finds out there is a tattoo parlor in town that is giving metallic tattoos that are very similar to those of the metallic lily tattoo that Alchemists wear. During her investigation, Sydney finds out that the tattoo parlor is receiving supplies with an Alchemist formula and vampire blood in order to give the tattoos, which give special powers and a high to the receivers of the tattoos on a short-term basis.

By the end of the novel, Sydney and the group manage to keep Jill safe and solve two mysteries. First, they find out who is supplying the tattoo parlor with the materials and put an end to it. Second, they find out who has been killing the girls to make it look like vampire hunters are on the loose.

More summaries and resources for teaching or studying Bloodlines.

Bloodlines from Gale. ©2005-2006 Thomson Gale, a part of the Thomson Corporation. All rights reserved.