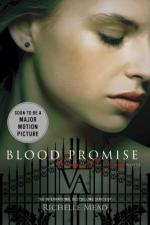 Richelle Mead
This Study Guide consists of approximately 29 pages of chapter summaries, quotes, character analysis, themes, and more - everything you need to sharpen your knowledge of Blood Promise.

This detailed literature summary also contains Topics for Discussion and a Free Quiz on Blood Promise by Richelle Mead.

Blood Promise is the fourth book in the Vampire Academy Series by Richelle Mead. In this novel, Rose Hathaway has traveled to Russia to find Dimitri, her lover who was turned into a Strigoi vampire during a rescue mission to save academy students and personnel kidnapped during an attack at the academy by the Strigoi. Rose fully expects to die when she finally confronts Dimitri, but feels it is worth it to free his soul. However, Rose did not expect to find herself faced with a choice: to become Strigoi herself and spend eternity with Dimitri, or die at Dimitri's hand. Blood Promise is an exciting fourth installment to the Vampire Academy series that leaves the reader breathless with every twist of the plot.

Rose is in Russia attempting to get information on a dhampir village in Siberia. Rose knows that Dimitri has come back to Russia and hopes to find him near his home village. However, Rose does not know where the village is. One night Rose is confronted by a human who knows about the vampires, a Alchemist. Rose has never heard of this group of humans who come up behind the dhampir guardians and clean up their kills because she has not graduated from the academy yet. However, the Alchemist, Sydney, gives her a crash course after Rose kills a Strigoi in an alley. Later, Rose tells Sydney about the village she needs to find and Sydney calls her bosses, giving them both the orders to travel to the village together.

When Rose and Sydney arrive in the village of Baia several days later, Rose finds herself in the home of Dimitri's mother, sisters, and grandmother. Rose is so overwhelmed by grief when one of the sisters mentions Dimitri that she realizes she must tell them what has happened to Dimitri. Afterward, the family throws a memorial service for Dimitri, whom they consider dead even though he has become Strigoi. At the same time, Rose meets Abe, a rich and powerful Moroi who has taken a special interest in her safety for some unknown reason. Rose thinks that Abe is working for her mother or someone at the academy who wants her returned safely. Therefore, when Abe helps save one of Dimitri's sisters from a dangerous situation, Rose agrees to leave Baia. Instead of returning home, however, Rose goes with a group of unpromised dhampir to Novosibirsk to renew her search for Dimitri.

Rose and the group of unpromised dhampir hunt and interrogate several Strigoi on their first night in the city. Rose finds one dhampir who knows Dimitri. Rose sends him back to Dimitri with the message that she is searching for him. A few days later, Dimitri approaches Rose on the street. Rose hesitates when given the opportunity to kill him and Dimitri overpowers her. Rose wakes a day later in a strange place. Dimitri gives her the choice to become a Strigoi or to die at his hand. Rose refuses to make the choice and instead allows Dimitri to feed from her. Rose falls into an addiction to the endorphins released during these feedings and stops trying to kill Dimitri or even find a way to escape.

At the same time Rose is being held captive by Dimitri, Lissa is back at the academy. However, Lissa' behavior has altered and she has estranged herself from everyone who cares about her. Adreian tries to get Rose to come home to help Lissa, but realizes that Rose is also in trouble. Lissa's plight and Adrian's plea for help brings Rose somewhat out of her addiction and she begins to avoid Dimitri's bites in the hopes of becoming sober enough to make an escape. The escape goes badly, however, and Dimitri is forced to kill his old mentor and several other Strigoi as Rose escapes his clutches. Dimitri follows Rose and they fight on an old bridge. Dimitri falls into the water after Rose stabs his chest with a silver stake.

As Rose recovers from her injuries, she becomes aware that Lissa is in danger. With help from another spirit user, Rose is able to rescue Lissa. Rose returns home and promises her mother that she will return to school. However, Rose learns that Dimitri is still alive and that the brother of Lissa's most dangerous enemy, Victor Dashkov, has the answer to saving him.

More summaries and resources for teaching or studying Blood Promise.