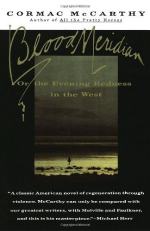 Blood Meridian, or the Evening Redness in the West Summary & Study Guide

Cormac McCarthy
This Study Guide consists of approximately 55 pages of chapter summaries, quotes, character analysis, themes, and more - everything you need to sharpen your knowledge of Blood Meridian, or the Evening Redness in the West.

Blood Meridian, or the Evening Redness in the West Summary & Study Guide Description

Blood Meridian, or the Evening Redness in the West Summary & Study Guide includes comprehensive information and analysis to help you understand the book. This study guide contains the following sections:

This detailed literature summary also contains Topics for Discussion and a Free Quiz on Blood Meridian, or the Evening Redness in the West by Cormac McCarthy.

Blood Meridian follows a teenager, known only as the "kid", as he runs from his home in Tennessee and finds himself in Texas, a member of a renegade unit of the army still intent on fighting the Mexican War. After entering Texas, this unit is ambushed by Indians and massacred. He then joins the Glanton Gang to avoid jail time and finds himself linked with a dark man he has met before, Judge Holden. What follows is a dark, violent story about the west that will leave its readers stunned by its gory conclusion.

At fourteen, the kid runs away from home and finds himself in Texas where, after some trouble that has him running from the law, the kid joins up with a renegade unit of the army still intent on fighting the Mexican War. However, once in Mexico, the kid's army unit is massacred, leaving behind only a few survivors. The kid begins to wander in the desert, unharmed but desperate for water, and is joined by a badly wounded member of the army unit. The two wander the desert for several days before the other man's injuries force him to stay behind. The kid finds civilization but is quickly put in jail for past offenses. Once there, he finds himself reacquainted with a man he has met before. This man arranges for him, the kid, and another man to join the Glanton Gang, under contract with the governor to kill Indians and to track down a man named Gomez.

The kid travels with this gang for many weeks, moving from village to village, often traveling in the desolation of the desert. On the few occasions when the group stays in a village, a child mysteriously goes missing during their visit. There is also a moment when they attack a village of Indians thinking they have found Gomez, but they soon learn they were wrong. They are a violent group. Upon return to Chihuahua City to collect their due for scalps collected, the gang violently tears up the town. Afterward, they go on a killing spree so heinous that the governor cancels their contract and puts out a warrant for Glanton. Glanton does not worry about this. Instead, he gets another contract with the Sonora governor.

The Glanton gang comes across a settlement in which a doctor is running a ferry service across the river. The gang convinces the doctor he is in danger from the local Indians and takes over the service for him. They run the service as a way to steal from travelers. However, the Indians teamed up with the Glanton gang to stage a fake attack on the landing to encourage the current owner of the ferry to give it up. Several Indians die during this attack, causing the survivors to feel angry and betrayed. At dawn one morning, the Indians attack the gang and kill everyone except for the Judge, the kid, Toadvine, and the ex-priest, as well as two men who were not at the camp at the time. The Judge attempts to get the kid to travel with him or give him his gun, but the kid resists. The Judge follows the kid's tracks, as he travels with the ex-priest and attempts to kill him but fails. Weeks later, the kid and the ex-priest arrive in California, just in time to see two of their fellow survivors hung.

The kid spends the next thirty years traveling around, making a transient living. One day, he finds himself in the same town as the Judge, whom he has not seen since the Glanton gang's massacre. The kid and the Judge talk in the bar for a few minutes, and then the kid goes off to enjoy a dance being thrown in the back room of the bar. When the kid goes to use the outhouse, he runs into the Judge and is brutally murdered.

More summaries and resources for teaching or studying Blood Meridian, or the Evening Redness in the West.

Blood Meridian, or the Evening Redness in the West from BookRags. (c)2022 BookRags, Inc. All rights reserved.