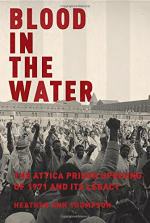 Summary
+Chapters Summary and Analysis
The Tinderbox
Power and Politics Unleashed
The Sound Before the Fury
Retribution and Reprisals Unimagined
Reckonings and Reactions
Inquiries and Diversions
Justice on Trial
Blowing the Whistle
David and Goliath
A Final Fight
Important People
Objects/Places
Themes
Styles
Quotes
Topics for Discussion
Order our Blood in the Water: The Attica Prison Uprising of 1971 and Its Legacy Study Guide

Blood in the Water: The Attica Prison Uprising of 1971 and Its Legacy Summary & Study Guide

Heather Ann Thompson
This Study Guide consists of approximately 79 pages of chapter summaries, quotes, character analysis, themes, and more - everything you need to sharpen your knowledge of Blood in the Water.

Blood in the Water: The Attica Prison Uprising of 1971 and Its Legacy Summary & Study Guide Description

Blood in the Water: The Attica Prison Uprising of 1971 and Its Legacy Summary & Study Guide includes comprehensive information and analysis to help you understand the book. This study guide contains the following sections:

This detailed literature summary also contains Topics for Discussion on Blood in the Water: The Attica Prison Uprising of 1971 and Its Legacy by Heather Ann Thompson.

The following version of this book was used to create this guide: Thompson, Heather. Blood in the Water: The Attica Prison Uprising of 1971 and Its Legacy. Pantheon, 2016.

Conditions at the Attica Correctional Facility in the 1970s reflected both society’s underlying racial tensions - despite the effects of the civil rights movement - and the “tough on crime” stance so popular among lawmakers of the day (19). Attica was overcrowded with young, urban, minority inmates in an already archaic facility, that “looked in 1970 just as [it] had when the prison was built in the 1930s” (7). The government’s new War on Crime declared by Nixon streamlined the seemingly indiscriminate policing and imprisoning of minorities under the rhetoric of public safety. As a result, Attica was no longer a maximum-security facility reserved for the worst of the worst, but a facility bursting at the seams with men serving time for minor parole violations or smaller crimes. Dismal conditions, a lack of supplies, almost non-existent medical care, and the echoing cries for racial and class equality outside the prison walls fueled political fervor at the prison; knowledge became inmates’ most valuable tool, and some even tried their hand in jailhouse legal work. Acting in sync with prisons around the country, Attica’s inmates began to demand they be treated with mere inklings of human dignity. In response, prison administrators and correction officers enacted punishment more frequently and more severely. Tensions between guards and inmates erupted in September of 1971, when fleeting moments of confusion and panic turned into a riot lasting five days.

During the standoff, inmates with the help of an impartial committee of observers drafted a list of meaningful demands for changes to the institution, such as religious and political freedom, adequate health care, more nutritious food, access to more showers and other sanitary items like soap, and, most importantly, amnesty from all criminal and legal reprisals in the aftermath of the uprising. As betting chips, the inmates took almost forty CO and civilian employee hostages who, despite false reports from federal and state officials, were not harmed by inmates during the riot. The most carnage to be done, coincidentally, was at the hands of the state of New York. On the fifth day of the uprising, Governor Nelson Rockefeller approved a plan to retake Attica by force. By then, hundreds of state troopers from across the state, National Guardsmen, correction officers from both Attica and neighboring prisons, sheriffs, and sheriff’s deputies were gathered outside “chomping at the bit” to retake the prison (163). Not only had these men been impatiently waiting outside in the cold rain for days, but they were armed to the teeth with undocumented shotguns and rifles, and fueled by atrocious rumors of inmates maiming hostages inside the walls. Twenty-nine inmates and ten hostages were shot and killed by law enforcement during their armed retaking of Attica. Scores of others were seriously injured and, worse yet, tortured relentlessly during and after being rehoused in their cells.

Historian Heather Thompson divides this intriguing and meticulously detailed study loosely into two sections, one retelling the events from September 9th to September 15th, and one analyzing Attica’s aftermath and legacy. A massive part of Attica’s legacy can be found in the decade’s worth of criminal and civil court proceedings that followed the uprising and retaking, where the motivations of the state are evident and unjust. A combination of her thorough investigating and a stroke of sheer luck allowed Thompson to confidently hold the state accountable in this book; in 2006, she was permitted to see Attica documents such as everything from “grand jury testimony, to depositions and indictments, to memos and personal letters” in an Eerie County Courthouse, which she claims she was not supposed to see (xiv). These documents helped Thompson fill gaps in the narrative of Attica, specifically in terms of the state’s wrongdoing. Most damningly, the documents prove that the state knew which of its troopers and COs wrongfully discharged their weapons on the day of the retaking, yet cases were never pursued. The state actively and for a while successfully implemented a cover-up of their actions at Attica, one that Thompson seeks to unravel with this book.

More than forty-five years after the events at Attica, many documents remain under wraps by the state of New York. Both surviving inmates in 2000 and surviving hostages and slain hostages’ families in 2005 received settlements of $12 million each, yet the state neither apologized for its excessive use of force nor held any individual accountable. Many victims passed before achieving any sense of justice, and even those who received compensation found the victory “hallow” without the state’s admission of accountability (550). Through this book, Thompson seeks to retake the narrative of Attica from the state of New York and give it back to Attica’s victims. Her hundred-page-long notes and index at the end of her book are a shining testament to her goal of creating a comprehensive and accurate narrative told from the perspective of those most affected by the tragedy – the inmates, surviving hostages, and those who lost their lives at Attica.

More summaries and resources for teaching or studying Blood in the Water: The Attica Prison Uprising of 1971 and Its Legacy.

Blood in the Water: The Attica Prison Uprising of 1971 and Its Legacy from BookRags. (c)2022 BookRags, Inc. All rights reserved.