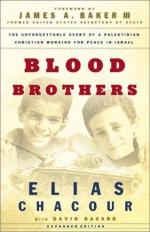 This detailed literature summary also contains Topics for Discussion and a Free Quiz on Blood Brothers by Elias Chacour.

Elias Chacour enjoyed a simple childhood in Biram, a small village in Galilee. School, church, and family met his needs and nurtured his soul, so he grew in the security of love and spirituality. Even as a young child, he particularly enjoyed going off by himself to talk with his hero, Jesus, a man he came to know not just as the Christian savior but as a human with strength and purpose. Life as he knew it came to a violent and crushing end, however, as World War II ended and Zionist Jews, with their militias, moved into Palestine, confiscating Palestinian land, routing entire villages, and driving the natives from their own land. Elias' family was forced from their village, their orchards ultimately being sold to a Zionist investor. In a horrible twist of irony, Elias' father and older brothers, from their new home in Gish, were employed to work in the fig orchards they once owned. Hoping to provide a better future for his young son, Michael Chacour sent Elias to an orphanage in order to receive and education under the supervision of the Bishop. As a student and then seminarian, Elias sought somehow to reconcile what had been inflicted upon his people with the promises of God and Jesus, though he struggled with anger and hatred toward the interloping Zionists well into adulthood. Upon ordination, he was assigned a dying church in the factious village of Ibillin and was forced to confront his own "demons" as he fought to unify its people. His journey to ultimate reconciliation within himself and his subsequent efforts to foster reconciliation among warring peoples, rewrites much of the history of the Middle East, providing the reader with perspectives not given in typical Western history texts. Rather than focus on the injustices of the past, however, Father Chacour, from his current residence in the village of Ibillin, has become a force for peace, justice and reconciliation among all ethnic and religious groups in Israel, bringing dignity to Arabic Palestinians and fostering cooperation and mutual effort toward progress. Chacour has spearheaded the construction of community centers, schools and libraries in native Palestinian villages throughout Israel and has founded the country's first non-sectarian university in Ibillin. He has received praise and honor from fellow Christians, Muslims, and the Israeli government, so much so, that he was named Man of the Year in Israel. Blood Brothers is both an authentic picture of the historical development of the current Palestinian issue and a story of the spiritual journey of one man who refused to allow the forces of anger and hatred to consume him.