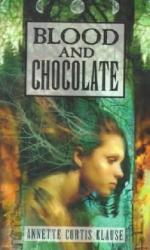 Annette Curtis Klause
This Study Guide consists of approximately 77 pages of chapter summaries, quotes, character analysis, themes, and more - everything you need to sharpen your knowledge of Blood and Chocolate.

Vivian is a werewolf living with her mother and her pack in a city in Maryland. She falls in love with a human boy, but is devastated when he is unable to accept her for who she is. Her rage and grief cause her to lose control of herself while in wolf form. When murders begin to happen, Vivian is terrified that she is the killer. However, she learns that another werewolf in her pack, Astrid, has been setting her up. Astrid now plans to murder Aiden, so Vivian runs to his defense, only to find that Aiden means to kill her. She fights Astrid but is accidentally shot. She is permanently trapped between wolf and human form until she learns to accept her identity as a werewolf. When she does, she becomes the new queen of the pack, and chooses the pack's leader as her new mate.

Vivian has been forced to move home to Maryland after her home in West Virginia was burned down. This was in retaliation for murders committed by werewolves in her pack. Her father, the leader of the pack, died in the fire. Now the pack is living in the suburbs of a Maryland city and is separated and disjointed without a leader. Vivian feels very alone and confused.

When she sees a poem about werewolves in her school magazine, she decides to seek out the author. She finds Aiden, a good-looking boy who she is immediately attracted to. Vivian begins a relationship with Aiden and soon becomes a part of his group of friends. With them she finds the acceptance and friendship that she is not getting from the pack. However, she does not dare tell them her secret, for fear they will react badly and put the pack in danger once again.

The pack decides that it will need to fight to decide who will be the next leader. An Ordeal is held, a ritualized tournament between werewolves. Gabriel defeats his competition to become the new leader. Vivian's mother is attacked by a nasty female werewolf called Astrid. Vivian leaps to her defense and savages Astrid, accidentally becoming the new queen of the pack. She is now expected to mate the new leader, Gabriel. Vivian is appalled and runs away. Gabriel makes it clear that he wants her, but will not force her into what she does not want.

Vivian decides to reveal her true self to Aiden, and transforms in front of him. He is terrified and ends their relationship, telling her that he is too disturbed by her beast form. She is angry and upset, and her emotions get the better of her. She wakes up the next morning not remembering anything and realizes that she must have lost control while in wolf form. There is blood all over her, and when she hears about a murder, she begins to suspect that she is the killer. Later, when she sees Aiden dating another girl called Kelly, Vivian goes crazy and trashes Kelly's room. She then loses control again, and the next morning hears of another murder. She is now convinced that she is the killer, and decides that the only way to keep the pack safe is to kill herself. She leaves a note for her mother and walks to an abandoned building, where she douses herself in gas.

Before she can light a match, a werewolf called Willem arrives and tells her to stop. She is not the killer. She is being set up by Astrid. Gabriel arrives and comforts her. She then realizes that the latest murder victim is Aiden's friend, and that Astrid means to kill Aiden. She goes to the rocks where Aiden is waiting for her. He pulls out a gun and tells her that he means to end her suffering by ending her life. Just then, Astrid and another werewolf called Rafe arrive. Aiden shoots Rafe and Vivian fights Astrid. Gabriel and the others arrive, and Gabriel kills Astrid. However, Vivian is accidentally shot by the terrified Aiden. Vivian begs the others to spare Aiden. Gabriel angrily orders Aiden to leave.

Vivian is now permanently stuck between human and wolf form. She thinks that the silver bullet has caused this, but Gabriel helps her to understand that she can only heal if she learns to accept herself for who she really is. She does so, and is healed. She then chooses Gabriel as her mate, realizing that he is what she has needed and wanted all along. She prepares for a new life as queen of the pack.

More summaries and resources for teaching or studying Blood and Chocolate.