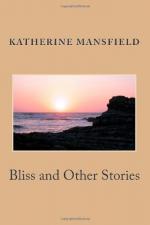 Katherine Mansfield
This Study Guide consists of approximately 76 pages of chapter summaries, quotes, character analysis, themes, and more - everything you need to sharpen your knowledge of Bliss.

Read another of Katherine's Mansfield's London stories, such as "Marriage à la Mode." Then compare Mansfield's use of satire and imagery in the stories, as well as her presentation of characters and relationships. Which story do you think is more successful? Why?

In "Bliss," Mansfield mentions several poems and plays. Locate and read one of these "modern" poems and plays of the early 1920s. How does this poem or play relate to the themes of Mansfield's story? Does it add to your understanding of that era? In what way?

J. F. Kobler wrote, "A first-time reader of a Mansfield story may have similar feelings of bliss while experiencing the story and may well not understand their source." Write a paragraph describing your initial reactions after reading "Bliss" for the first time.

Mansfield drew on her intimate knowledge of the bohemian London art...

More summaries and resources for teaching or studying Bliss.

Bliss from Gale. ©2005-2006 Thomson Gale, a part of the Thomson Corporation. All rights reserved.