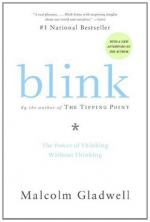 Related Topics
Outliers: The Story of Success
The Tipping Point
David and Goliath: Underdogs, Misfits, and the Art of Battling Giants
Talking to Strangers: What We Should Know About the People We Don't Know

Malcolm Gladwell
This Study Guide consists of approximately 37 pages of chapter summaries, quotes, character analysis, themes, and more - everything you need to sharpen your knowledge of Blink.

“Blink” by Malcolm Gladwell is a non-fiction work that describes the values of snap judgments and rapid cognition both of which are part of being human. Although snap decisions seem to come out of nowhere, they are actually based in volumes of that resides in our subconscious. It is the locked chamber of the brain that we trust our snap decisions to. These quick assessments are not baseless and although the information in our subconscious cannot be explored per se, there are ways to makes some reasonable assumptions about it.

One way to tap this store of data and experiences, is to use a process called thin-slicing. It is not a subject that is taught in school although practice can hone this innate ability. Thin-slicing may sound like psycho-babble, but it is actually a process that is quite natural and organic. When a person first meets another person he or she naturally sizes that person up. For one, the ego will compel the person to make sure that the stranger exhibits no signs of danger.

Thin-slicing a person for signs of danger would include checking to see if he has any weapons, battle scars, missing teeth, a leering look, heavy perspiration – anything that would indicate that danger lurks. This process takes only seconds. But how does one know that battle scars, weapons and a leering gaze are indications of danger? That association was made long ago and was stored in a locked area of the subconscious mind. The person doesn’t have to go through a long process to come up with a list of nefarious characteristics – the list is waiting there in the unconscious to be tapped.

Snap judgments can be good but that can also be disastrous. There cannot be total reliance on the data the subconscious provides because misinformation and biases are also stored in the subconscious. The subconscious doesn’t make judgments. It’s like a computer and can only print out what has been input into it. When Amadou Diallo was gunned down on his front porch in New York City by four white cops, they thought the young man was holding a pistol in his hands when it turned out to be a wallet. He was unarmed and had done nothing wrong. He was black, he was out late at night and had a gun… which was actually a wallet. The police officers had associations stored in their subconscious that led them to believe Diallo had to be guilty of something. Were he a white man, would he still be alive?

When a young female trombone player tried out for the Munich Philharmonic she was chosen over thirty other candidates. They had all performed behind a screen so biases would not impact the selection committee’s decisions. However, when she walked from behind the screen the committed had assumed that she was a man. They were aghast. The trombone is a masculine instrument. Women play violins and oboes. Looks like they really didn’t get the purpose of the screen. The Philharmonic eventually modernized and learned to evaluate musicians solely with their ears and not their eyes.

Gladwell provides many anecdotal incidents as well as the results of extensive research and experiments on the human’s ability to make snap decisions and where those strengths and flaws originate. The best way to take advantage of this natural ability is to know it’s there, recognize its power and limitations and learn how it works.

More summaries and resources for teaching or studying Blink.