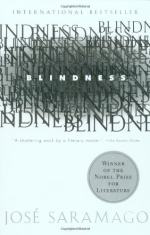 A man suddenly goes blind for no apparent reason. As a doctor tries to assign an etiology, the condition begins to spread rapidly as if caused by a pathogen. Within days, there are hundreds of newly blind people and within a few months, the entire nation has gone blind. The government responds initially by creating large quarantine areas where infected persons are forcibly held without recourse to medical care or outside assistance. As the disease sweeps the nation, first social services then law enforcement completely fail, leaving the country in a state of chaos as the strong begin to prey upon the weak. Numerous crimes and outrages are perpetrated even as hundreds of thousands begin to starve and die. One small group of blind people coalesces around the leadership of a woman who - apparently uniquely - does not go blind. She cares for her new friends for many days until the disease begins to run its course and the afflicted begin to regain their sight, only to discover a world full of filthiness and destruction.

The novel begins with the apparent first, or index, case of an emerging infectious disease, which causes a form of blindness by causing the infected individual to see only a milky whiteness. The first blind man struggles to get home and then obtain medical assistance. Within hours, all those with whom he has had contact, including the ophthalmologist, are also blind. The doctor contacts the ministry of health and raises the alarm. Within days, the newly blind are forcibly incarcerated in an old mental hospital where they receive no medical care and are completely isolated from the outside world. Over the course of about a week, scores and then hundreds of additional blinded people are incarcerated until the facility is beyond any reasonable capacity. Unbeknownst to the inmates, the disease continues to sweep through the city and then the entire nation until everyone is blind.

One woman, the wife of the ophthalmologist, is apparently immune to the disease and does not go blind. However, in order to accompany her husband into quarantine, she claims to be blind. She witnesses the gradual descent into filth and horror faced by the inmates of the asylum. Armed guards shoot those trying to escape. Sanitary conditions are appalling and food deliveries are uncertain and inadequate. Overcrowding soon leaves many newcomers no recourse but to sleep in hallways full of excrement and refuse, and the dead go unburied for days. The asylum gradually forms a type of loose organization around the six main hospital wards.

Eventually one group of inmates forms a brutal gang and dominates the increasingly erratic food deliveries. They will release the food only for money or valuables until all of the valuable items have been collected and surrendered. The gang then demands that each ward, in turn, send all of the women to the gang for sexual exploitation. After prolonged arguments, the inmates feel compelled to acquiesce and several weeks of brutal gang rapes and sexual murders ensue. Finally, unable to continue, the blind woman retaliates by murdering the leader of the gang and several of the other gang members. Later, another abused woman sacrifices herself by starting a fire that kills the remaining gang members and consumes the entire facility. The inmates then realize they are no longer under guard and the survivors wander away.

Led by the only woman who can see, a small group of survivors walks to the nearby city where they manage a subsistence survival during several days of hardship. Freed from the horrors of the asylum, they come to realize that the entire city is in relatively the same condition. Their uncertain and incredibly negative future begins to overwhelm even the most optimistic. Amidst all of the chaos and horror, however, new relationships develop and old relationships are strengthened. Just as it seems that all is lost, the disease completes its infectious cycle and sight begins to return to the citizens of the beleaguered city and nation.